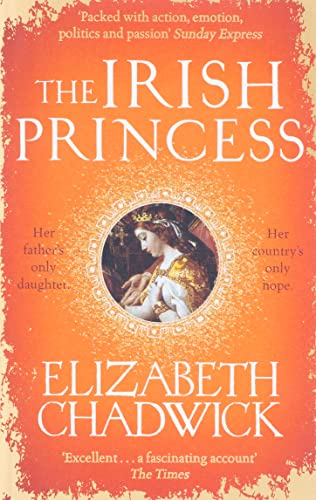 The Irish Princess by Elizabeth Chadwick

In her new standalone novel Elizabeth Chadwick brings to life one of history's forgotten figures - the fearless Irish princess and unsung heroine Aoife MacMurchada - as she did with her bestselling Eleanor of Aquitaine trilogy.

The Irish Princess: Her father's only daughter. Her country's only hope. by Elizabeth Chadwick

The King of Leinster, awaiting news of his newborn child, is disappointed to hear he has a daughter. Diarmait MacMurchada wanted another strapping son to shoulder a spear, wield a sword, and protect his kingdom. But from the moment Diarmait held the newborn Aoife knew she would be his most precious treasure.

Forced into exile Aoife and her family find themselves at the mercy of Henry II. Aoife - aware of her beauty but not its power - intrigues and beguiles Henry in equal measure. For Aoife he agrees to help her father, an alliance that leads the MacMurchadas to the charismatic Richard de Clare, a man dissatisfied with his lot and open to new horizons.

Diarmit promises Richard Aoife's hand in marriage in return for his aid in Ireland, but Aoife has her own thoughts on the matter. She may be a prize, but she is not a pawn, and she will play the men at their own game. For herself, for her family, and for her country.

From the royal halls of scheming kings, to staunch Welsh border fortresses and the wild green kingdoms of Ireland, The Irish Princess is a sumptuous, journey of ambition and desire, love and loss, heartbreak and survival.

'An author who makes history come gloriously alive'
The Times

'Stunning . . . Her characters are beguiling, and the story is intriguing'
Barbara Erskine

'A riveting read . . . A glorious adventure not to be missed!'
Candis

Chadwick has excelled herself. This terrific novel is packed with action, emotion, politics and passion -- Kate Atherton * Sunday Express *
Elizabeth Chadwick is an excellent chronicler of royal intrigue... [The Irish Princess] is a fascinating account of Aoife's life * The Times *
Sink into this verdant and vibrant countryside spectacular, as the moving historical drama is brought to life through its raw characters and other-worldly landscapes. All sides of power, ambition and loyalty will show their face in this large scale tale for survival. * Magic Radio *
With a powerful heroine and a vivid portrayal of a little-known period, this is one not to miss * Woman's Own *
With intricate scheming, a powerful heroine and a vibrant portrayal of a little-known time period, this is one not to miss. * Woman's Weekly *
Gaelic drama... A vivid picture of medieval politics * BBC History Magazine *
Elizabeth Chadwick at her finest - a strong, fascinating heroine in a vividly created world. It had me gripped from start to end. Strongly recommended for people who like their historical fiction to leap off the page
Praise for Elizabeth Chadwick * - *
An author who makes history come gloriously alive * The Times *
One of Elizabeth Chadwick's strengths is her stunning grasp of historical details... Her characters are beguiling and the story is intriguing and very enjoyable -- Barbara Erskine
Enjoyable and sensuous * Daily Mail *
Picking up an Elizabeth Chadwick novel, you know you are in for a sumptuous ride * Daily Telegraph *
Chadwick's research is impeccable, her characters fully formed and her storytelling enthralling * Historical Novel Review *
Meticulous research and strong storytelling * Woman & Home *
A riveting read. Meticulously researched with a powerful storyline, this is a glorious adventure not to be missed! * Candis *
Engrossingly written and well-researched * Choice *
I rank Elizabeth Chadwick with such historical stars as Dorothy Dunnett and Anya Seton -- Sharon Kay Penman
Much of Elizabeth Chadwick's research is carried out as a member of Regia Anglorum, an early mediaeval re-enactment society with emphasis on accurately re-creating the past. She also tutors in the skill of writing historial and romantic fiction. She won a Betty Trask Award for The Wild Hunt and has been shortlisted for the RNA Awards four times.
GOR010540001
9780751565010
0751565016
The Irish Princess: Her father's only daughter. Her country's only hope. by Elizabeth Chadwick
Elizabeth Chadwick
Used - Very Good
Paperback
Little, Brown Book Group
2020-04-16
480
N/A
Book picture is for illustrative purposes only, actual binding, cover or edition may vary.
This is a used book - there is no escaping the fact it has been read by someone else and it will show signs of wear and previous use. Overall we expect it to be in very good condition, but if you are not entirely satisfied please get in touch with us
Trustpilot