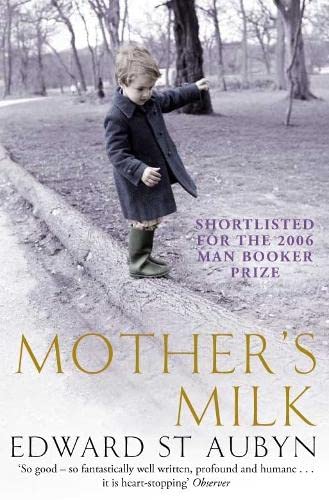 Shortlisted for the Man Booker Prize 2006

SHORTLISTED FOR THE MAN BOOKER PRIZE 2006

The once illustrious, once wealthy Melroses are in peril. Caught in the wreckage of broken promises, child-rearing, adultery and assisted suicide, Patrick finds his wife consumed by motherhood, his mother consumed by a New Age foundation, and his five-year-old son Robert understanding far more than he ought.

Showcasing Edward St Aubyn's ability to combine the most excruciating emotional pain with the driest comedy, Mother's Milk is a dazzling exploration of the troubled allegiances between parents and children, husbands and wives. Acerbically witty, disarmingly tender, it goes to the core of a family trapped in the remains of its ever-present past.

'So good - so fantastically well-written, profound and humane . . . it is heart-stopping' Observer

'Wonderful caustic wit . . . Polished yet profound, it's even better than his previous work, and that's saying something' Guardian

Edward St. Aubyn was born in London in 1960. He is the author of the novels A Clue to the Exit and On the Edge, and the trilogy Some Hope.
GOR000410648
9780330435918
0330435914
Mother's Milk by Edward St Aubyn
Edward St Aubyn
Used - Very Good
Paperback
Pan Macmillan
2006-09-23
288
Short-listed for Man Booker Prize 2006 (UK)
Book picture is for illustrative purposes only, actual binding, cover or edition may vary.
This is a used book - there is no escaping the fact it has been read by someone else and it will show signs of wear and previous use. Overall we expect it to be in very good condition, but if you are not entirely satisfied please get in touch with us
Trustpilot