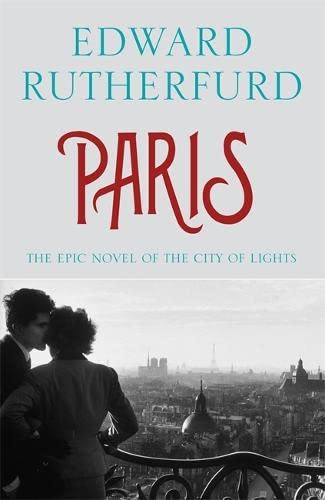 The epic novel of the most romantic city in the world.

City of love. City of splendour. City of terror. City of dreams.

Inspired by the haunting, passionate story of the city of lights, this epic novel weaves a gripping tale of four families across the centuries: from the lies that spawn the noble line of de Cygne to the revolutionary Le Sourds who seek their destruction; from the Blanchards whose bourgeois respectability offers scant protection against scandal to the hard-working Gascons and their soaring ambitions.

Over hundreds of years, these four families are bound by forbidden loves and marriages of convenience; dogged by vengeance and murderous secrets; torn apart by the irreconcilable differences of birth and faith, and brought together by the tumultuous history of their city. Paris bursts to life in the intrigue, corruption and glory of its people.

Beloved author of Sarum, London and New York, Edward Rutherfurd illuminates Paris as only he can: capturing the romance and everyday drama of the men and women who, in two thousand years, transformed a humble trading post on the muddy banks of the Seine into the most celebrated city in the world.

'From the ice-age to the present day, Rutherfurd's scope is vast. Both historical novel and adventure epic, this is a work of universal appeal.' * Kirkus UK, on SARUM *
'Hold your breath suspense, buccaneering adventure, and passionate tales of love and war.' * The Times, on LONDON *
'Remarkable ... grand.' * The New York Times, on LONDON *
'Not all good things come in small packages. If you like books that are big, Edward Rutherfurd is your man. He writes wonderful sagas, tales that cover centuries, always keeping these long stories lively by telling us about the events and conflicts of people's lives. Rutherfurd does the painstaking research; the reader has all the fun.' * The Seattle Times, on IRELAND *
'Incredible storytelling . . . Readers will fall in love with the iconic city.' * Post and Courier, on NEW YORK *

Edward Rutherfurd was born in England, in the cathedral city of Salisbury. Educated locally, and at the universities of Cambridge, and Stanford, California, he worked in political research, bookselling and publishing. After numerous attempts to write books and plays, he finally abandoned his career in the book trade in 1983, and returned to his childhood home to write SARUM, a historical novel with a ten-thousand year story, set in the area around the ancient monument of Stonehenge, and Salisbury.

Four years later, when Sarum was published, it became an instant international bestseller, remaining 23 weeks on the New York Times Bestseller List. Since then he has written five more bestsellers: RUSSKA, a novel of Russia; LONDON; THE FOREST, set in England's New Forest which lies close by Sarum, and two novels which cover the story of Ireland from the time just before Saint Patrick to the twentieth century.

In 2009 NEW YORK was published, and Edward is hard at work on another big novel at present. His books have been translated into twenty languages.

GOR010472302
9781444736793
1444736795
Paris by Edward Rutherfurd
Edward Rutherfurd
Used - Like New
Hardback
Hodder & Stoughton
2013-06-27
752
N/A
Book picture is for illustrative purposes only, actual binding, cover or edition may vary.
The book has been read, but looks new. The book cover has no visible wear, and the dust jacket is included if applicable. No missing or damaged pages, no tears, possible very minimal creasing, no underlining or highlighting of text, and no writing in the margins
Trustpilot