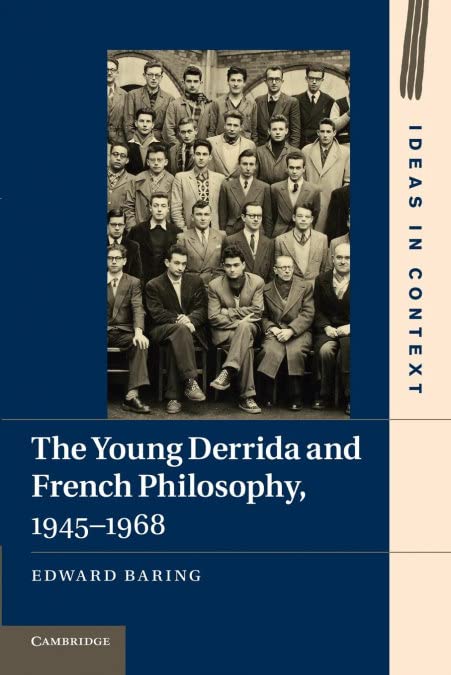 Baring sheds fresh light on Derrida, one of the most influential thinkers of the twentieth century. Drawing on new archival sources, Baring provides an intellectual history of the philosophies, institutions and movements of post-war France and a new interpretation of one of the most vibrant intellectual moments of modern times.

In this powerful study Edward Baring sheds fresh light on Jacques Derrida, one of the most influential yet controversial intellectuals of the twentieth century. Reading Derrida from a historical perspective and drawing on new archival sources, The Young Derrida and French Philosophy shows how Derrida's thought arose in the closely contested space of post-war French intellectual life, developing in response to Sartrian existentialism, religious philosophy and the structuralism that found its base at the Ecole Normale Superieure. In a history of the philosophical movements and academic institutions of post-war France, Baring paints a portrait of a community caught between humanism and anti-humanism, providing a radically new interpretation of the genesis of deconstruction and of one of the most vibrant intellectual moments of modern times.
'In The Young Derrida, we find a careful reconstruction of the intellectual and political climate in which Jacques Derrida developed his famous idea of deconstruction. In particular, Baring shows us how the development of deconstruction is involved in the history of humanism in postwar France going up to the May '68 uprisings. Indeed, Baring's readings of Derrida's early books on Husserl's phenomenology are exemplary. With an elegance rarely seen, Edward Baring has managed to weave cultural history with philosophy. The Young Derrida is a magnificent book.' Leonard Lawlor, Sparks Professor of Philosophy, Pennsylvania State University
'Drawing on a wealth of previously untapped sources and displaying a sure-handed command of postwar French philosophy and theology, Edward Baring presents us with a new and arresting interpretation of Derrida's origins. Contrary to conventional wisdom, he was far more enmeshed in Christian antihumanist thought than its Jewish counterpart, and retained many of its premises through all the changes of idiom in his later work. The Young Derrida masterfully exemplifies the power of intellectual history to illuminate even the darkest corners of philosophical development.' Martin Jay, Sidney Hellman Ehrman Professor, University of California, Berkeley
'It is hard to imagine this work being superseded as an intellectual biography of Jacques Derrida, and indeed of post-war French intellectual history, up to the May '68 uprisings.' Patrick Madigan, The Heythrop Journal
'... complex, learned ... [an] erudite book.' Jonathan Judaken, The Journal of Modern History
'The Derrida that Baring reconstructs is not the one we thought we knew. His reconstruction is so persuasive that the book succeeds in revising interpretations that have become truisms in Derrida scholarship ... The book impresses at every level ... Baring is diligent at getting things right.' Carolyn Dean, Modern Intellectual History
'[An] exciting reinterpretation of Derrida's early years.' Emile Chabal, Books and Ideas
'[This] is an outstanding historical account. The book combines a comprehensively informed sensitivity for the context with a masterly knowledge of Derrida's thought and the broader intellectual field in which he worked. Baring's work succeeds not only in enriching enormously our knowledge of Derrida's environment in those formative years of his philosophical development. With his artful philosophical readings, that are closely entwined with a contextual history of ideas, it changes our understanding of his thought.' Warren Breckman, translated from Zeitschrift fur Ideengeschichte
Edward Baring is Assistant Professor of Modern European Intellectual and Cultural History at Drew University. Educated at the University of Cambridge and Harvard University, his work was awarded the Harold K. Gross Prize by Harvard University in 2010. He has won fellowships from the DAAD, ACLS and Mellon Foundation.
Introduction; Part I. Derrida Post-Existentialist: 1. Humanist pretensions: Catholics, Communists and Sartre's struggle for existentialism in post-war France; 2. Derrida's 'Christian' existentialism; 3. Normalization: the Ecole Normale Superieure and Derrida's turn to Husserl; 4. Genesis as a problem: Derrida reading Husserl; 5. The God of mathematics: Derrida and the origin of geometry; Part II. Between Phenomenology and Structuralism: 6. A history of differance; 7. L'ambiguite du concours: the deconstruction of commentary and interpretation in Speech and Phenomena; 8. The ends of man: reading and writing at the ENS; Epilogue.
NLS9781107674622
9781107674622
110767462X
The Young Derrida and French Philosophy, 1945-1968 by Edward Baring (Drew University, New Jersey)
Edward Baring (Drew University, New Jersey)
Ideas in Context
New
Paperback
Cambridge University Press
2014-01-23
350
N/A
Book picture is for illustrative purposes only, actual binding, cover or edition may vary.
This is a new book - be the first to read this copy. With untouched pages and a perfect binding, your brand new copy is ready to be opened for the first time
Trustpilot