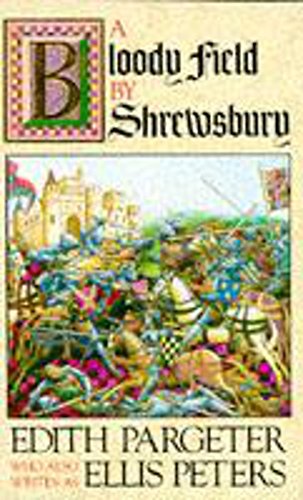 A Bloody Field by Shrewsbury by Edith Pargeter

From Edith Pargeter, who also wrote the bestselling Brother Cadfael Chronicles under the name Ellis Peters, a brilliant medieval tale of treachery, rebellion and crisis in Henry IV's kingdom.

A Bloody Field by Shrewsbury by Edith Pargeter

From Edith Pargeter, who also wrote as Ellis Peters, A BLOODY FIELD BY SHREWSBURY is a vivid medieval tale of Henry IV's kingdom in crisis. 'Chivalry, treachery, conflict of loyalties... The clash of wills is as stirring as the clash of steel' Observer

It is 1399. Henry Bolingbroke, unjustly banished and deprived of his inheritance by Richard II, returns to claim his rights and deposes the king to become Henry IV of England. He is aided by the powerful lords of Northumberland, especially by his friend, Harry Percy, nicknamed Hotspur.

But the triumph of his accession quickly turns sour in the face of ever-growing crises in his new kingdom, and Wales is the most pressing and troublesome of these. For although Henry's son and heir, Prince Hal, is the nominal Prince of Wales, the Welsh have a prince of their own blood in Owen Glendower, and they are swift to rally to his rebellious call to arms.

The three Henries all wish to see the House of Lancaster succeed, but their partnership contains the seeds of its own destruction. The memory of past crimes and growing doubts and divisions cause a dangerous rift. The king also has powerful enemies who are all too willing to take advantage of this and tension mounts as the three men are drawn inexplicably to a bloody collision some two miles from Shrewsbury...

Chivalry, treachery, conflict of loyalties...are the rich threads in the tapestry... The clash of wills is as stirring as the clash of steel * Observer *
A vivid portrait of Hotspur...one of the last knight-errants of the age * Sunday Times *
Outstanding...a tale compounded of romance, stirring adventure and subtle psychological insight * Publishers Weekly *
Edith Pargeter, OBE, who also wrote under the pseudonym Ellis Peters, was the bestselling author of twenty Brother Cadfael Chronicles and the illustrated short story collection A Rare Benedictine. She also wrote numerous critically acclaimed historical novels including A Bloody Field by Shrewsbury and The Brothers of Gwynedd Quartet. She was the recipient of the Crime Writer's Association and Cartier Diamond Dagger Award. She died in 1995.
GOR000530432
9780747233664
0747233667
A Bloody Field by Shrewsbury by Edith Pargeter
Edith Pargeter
Used - Very Good
Paperback
Headline Publishing Group
1989-10-05
384
N/A
Book picture is for illustrative purposes only, actual binding, cover or edition may vary.
This is a used book - there is no escaping the fact it has been read by someone else and it will show signs of wear and previous use. Overall we expect it to be in very good condition, but if you are not entirely satisfied please get in touch with us
Trustpilot