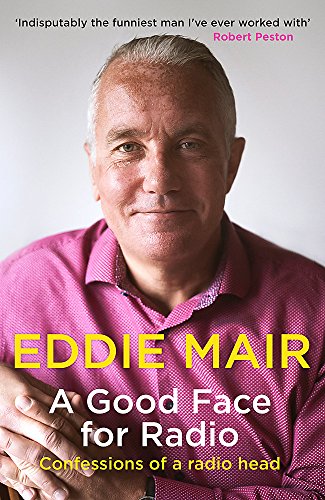 A Good Face for Radio by Eddie Mair

The diaries of one of Britain's most beloved broadcasters, and the UK's favourite radio voice.

A Good Face for Radio: Confessions of a Radio Head by Eddie Mair

Eddie Mair is, by his own account, one of Britain's most beloved broadcasters.

Born in Dundee, Scotland, he has worked in radio all his adult life. From the foothills of commercial radio in his hometown, through the sunlit uplands of the BBC in Scotland, he has reached the peaks of his profession, with BBC network radio in London. And he's never afraid to work a metaphor beyond endurance.

In addition he's appeared on most of the BBC's TV channels, including ones that are no longer on TV. He witnessed the handover of Hong Kong and once asked Arnold Schwarzenegger a question - though he takes no responsibility for either.

For nearly twenty years he has been at the helm of Radio 4's PM: a nightly news round up that means Eddie works for just one hour a day, giving him plenty time to knock together these diaries.

In truth, his neediness is an irritation to everyone who knows him and if you buy this book he might get out of their hair.

Eddie's other work, as a humanitarian and tireless, secret worker for charity is not mentioned in these pages.

Indisputably the funniest man I've ever worked with -- Robert Peston
Eddie Mair has worked in radio and television since 1983. For nearly twenty years he's presented Radio 4's nightly news programme PM and for ten years has co-presented its sister programme iPM. He writes a column every week for Radio Times.
GOR009079972
9781408710678
1408710676
A Good Face for Radio: Confessions of a Radio Head by Eddie Mair
Eddie Mair
Used - Like New
Hardback
Little, Brown Book Group
2017-11-02
304
N/A
Book picture is for illustrative purposes only, actual binding, cover or edition may vary.
The book has been read, but looks new. The book cover has no visible wear, and the dust jacket is included if applicable. No missing or damaged pages, no tears, possible very minimal creasing, no underlining or highlighting of text, and no writing in the margins
Trustpilot