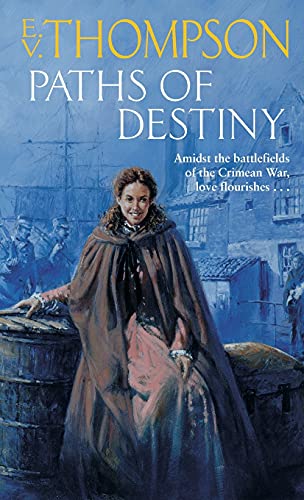 Amidst the battlefields of the Crimean War, love flourishes...

Cornwall, 1854 - Alice Rowe owes everything to Reverend Alfred Markham who rescued her from a workhouse, employing her in his parsonage as a housemaid. So when he dies suddenly of a heart attack, Alice faces a fearful and uncertain future. But as one chapter in Alice's life ends, another begins. For as she discovers the Reverend's body in the woods near their house, she meets Gideon Davey - a 'ganger' who is laying a nearby stretch of railway line. Not only does Gideon help recover the body, but he returns to Trelaggan for the funeral - and also to see Alice again.

Gideon's behaviour does not go unnoticed in Trelaggan - especially from those critical of Alice and her past. Though he is threatened, Gideon is man enough to stand up to the village bullies. Then, just as Alice and Gideon's friendship hints at something more serious, Gideon is given an offer he can't refuse: to travel to the Crimea and build a railway to help the British troops.

Gideon, however, is not the only person about to leave Cornwall. For the arrival of the new rector finds Alice moving on too - and starting a remarkable chain of events that follow Gideon's journey across the world . . .

E V Thompson was born in London and spent nine years in the Navy before joining the Bristol police. He moved to Hong Kong, then Rhodesia and had over 200 stories published before returning to England to become a full-time award-winning writer.
GOR012528605
9780751545678
0751545678
Paths Of Destiny by E. V. Thompson
E. V. Thompson
Used - Like New
Paperback
Little, Brown Book Group
2011-06-02
400
N/A
Book picture is for illustrative purposes only, actual binding, cover or edition may vary.
The book has been read, but looks new. The book cover has no visible wear, and the dust jacket is included if applicable. No missing or damaged pages, no tears, possible very minimal creasing, no underlining or highlighting of text, and no writing in the margins
Trustpilot