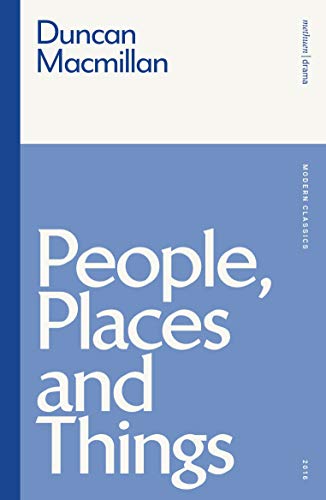 Macmillan doesn't shy away from difficult questions about addiction and recovery and, rightly, doesn't answer them ... this is a bold, timely and searching play - Financial Times Emma was having the time of her life. Now she's in rehab. Her first step is to admit that she has a problem. But the problem isn't with Emma, it's with everything else. She needs to tell the truth. But she's smart enough to know that there's no such thing. When intoxication feels like the only way to survive the modern world, how can she ever sober up? People, Places & Things premiered at the National Theatre in 2015 before transferring to London's West End and St. Ann's Warehouse in New York. Published for the first time in Methuen Drama's Modern Classics series, this edition features a brand new introduction by Naomi Obeng.
Duncan Macmillan is not the first dramatist to tackle addiction. What gives his new play exceptional vibrancy, though, is its decision to draw parallels between rehab and theatrical process, and to present the action from the addict's point of view...a vivid tale * Guardian *
Generous-spirited, with a strong streak of irreverent, darkly humane humour, the play...has a thoughtful, shifting ambivalence that suits a problem where the solutions can only ever be provisional and the amends inadequate * Independent *
Macmillan doesn't shy away from difficult questions about addiction and recovery and, rightly, doesn't answer them. Is Emma messed up because of her past, the state of the world or the purposelessness of life? Or is she self-absorbed, self-pitying and deceitful? Is the spiritual aspect to Alcoholics Anonymous problematic? And, if it works, does that matter? He is plain about the hard grind of recovery, for everyone involved. And he touches on broader questions about the pros and cons of role-play - in theatre, in therapy and in life...this is a bold, timely and searching play * Financial Times *
Duncan Macmillan's work has been performed throughout the world, including at the National Theatre, Royal Court, Almeida, Barbican, St Ann's Warehouse, Melbourne Theatre Company, Berliner Ensemble, Hamburg Schauspielhaus, Schauspielhaus Koln, Burgtheater Vienna, Vesturport, Kansallisteatteri, Nationaltheatret Oslo and in the repertory of the Schaubuhne Berlin, as well as the Edinburgh Festival, the Manchester International Festival, Salzburg Festival, Festival d'Avignon and Theatertreffen, in the West End and on Broadway. His plays include Lungs; People, Places and Things; Every Brilliant Thing; Rosmersholm (adapt. Henrik Ibsen); 1984 (adapt. George Orwell, co-written and co-directed with Robert Icke); City Of Glass (adapt. Paul Auster) and 2071 (co-written with Chris Rapley). Other plays include The Forbidden Zone; Wunschloses Ungluck (adapt. Peter Handke); Reise Durch die Nacht (adapt. Friederike Mayrocker). Both 1984 and People, Places and Things were nominated for Best New Play at the Olivier Awards.
NPB9781350200593
9781350200593
135020059X
People, Places and Things by Duncan Macmillan
Duncan Macmillan
Modern Classics
New
Paperback
Bloomsbury Publishing PLC
20210923
152
N/A
Book picture is for illustrative purposes only, actual binding, cover or edition may vary.
This is a new book - be the first to read this copy. With untouched pages and a perfect binding, your brand new copy is ready to be opened for the first time
Trustpilot