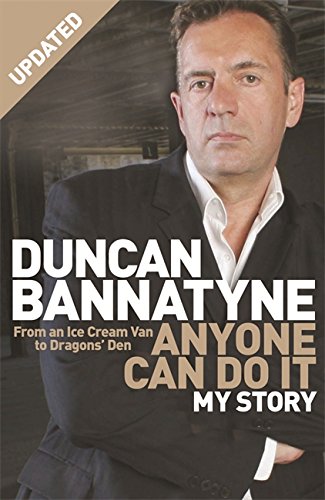 Anyone Can Do It by Duncan Bannatyne

Anyone Can Do It: My Story by Duncan Bannatyne

At 30, Duncan Bannatyne had no money and was enjoying life on the beaches of Jersey. He saw a story of someone who had made himself a millionaire, and decided to do the same. Five years later he had done it, and now he is worth GBP168 million.

In this remarkable book, Bannatyne relives his colourful path to riches, from ice cream salesman to multi-millionaire, explaining how anyone could take the same route as he did - if they really want to.

Hugely articulate, and with numerous fascinating and revealing stories to tell, this is an autobiography and a business book unlike any other - but then Bannatyne isn't like any other businessman, either.

Duncan Bannatyne is the former stoker in the Navy who built up his own business empire and is now a star of the TV series Dragons' Den and Fortune: Million Pound Giveaway
GOR001228073
9780752881898
0752881892
Anyone Can Do It: My Story by Duncan Bannatyne
Duncan Bannatyne
Used - Very Good
Paperback
Orion Publishing Co
2007-09-03
320
N/A
Book picture is for illustrative purposes only, actual binding, cover or edition may vary.
This is a used book - there is no escaping the fact it has been read by someone else and it will show signs of wear and previous use. Overall we expect it to be in very good condition, but if you are not entirely satisfied please get in touch with us
Trustpilot