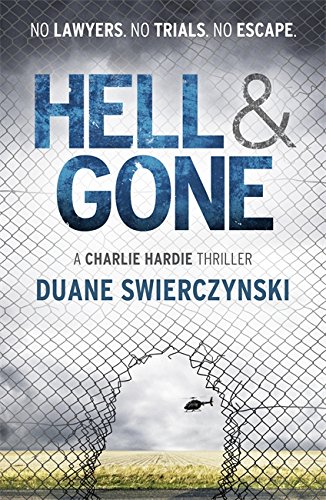 Hell and Gone by Duane Swierczynski

No lawyers. No trials. No escape.

Hell and Gone by Duane Swierczynski

There are some criminals so dangerous the world can never know about them.
They can't be held in regular prisons.
They must never be released.

They're here - in a secret underground prison miles away from anywhere. And now, so is Charlie Hardie. The shadowy organisation running the jail sent him there as punishment for getting in their way. But he's not a prisoner. He's in charge.

He can leave any time he wants, he's told. There's just one catch: if he goes, everyone in the prison dies, including innocent guards.

But when Charlie realises his family may be in danger, he knows he must protect them at any cost.

Even if it means blasting his way out, one inmate at a time...

Praise for FUN AND GAMES * . *
Swierczynski steps on the gas early in this pulse-pounding contemporary thriller, the first of a trilogy, and doesn't let up...The sequel's appearance won't be too soon for many readers. * Publishers Weekly Starred Review *
A high octane, cinematic delight that uses film techniques of fast pace and quick cuts and highly visual scenes to rivet the reader to their chair. I loved it * Joe R. Lansdale *
A hip, dead smart novel, an entertaining start to what promises to be an addictive action trilogy * Australian *
Packs enough indestructible villains to satisfy a "Die Hard" fan, and each chapter ends on a cliffhanger...Written in deadpan sentences and funny as can be, this first installment of a projected trilogy left me greedy for more. * Bloomberg *
Cool, suspenseful, tragic, and funny as hell...I haven't had this much fun reading in a long time. * Sara Gran, author of Dope and Come Closer *
A furiously paced tale that cries out to be filmed * Canberra Times *
Reads like a Quentin Tarantino movie on speed, full of high-octane action, flying by at a breakneck pace, not for the faint of heart, but also with plenty of humor * CNN.com *

Duane Swierczynski is the author of thrillers Expiration Date and Severance Package, both published in the US but not the UK. He also writes for Marvel Comics and co-authored Level 26 with CSI creator Anthony Zuiker.

GOR003317105
9781444707588
1444707582
Hell and Gone by Duane Swierczynski
Duane Swierczynski
Charlie Hardie
Used - Very Good
Paperback
Hodder & Stoughton
2011-10-27
320
N/A
Book picture is for illustrative purposes only, actual binding, cover or edition may vary.
This is a used book - there is no escaping the fact it has been read by someone else and it will show signs of wear and previous use. Overall we expect it to be in very good condition, but if you are not entirely satisfied please get in touch with us
Trustpilot