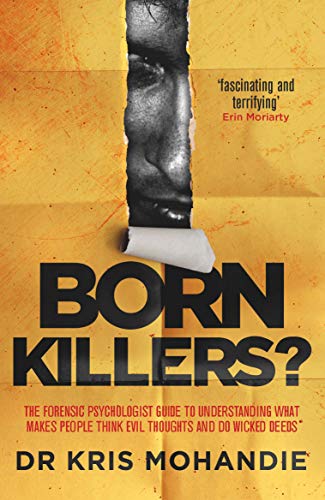 Over his 30-year police and forensic psychology career, Dr Kris Mohandie has come face-to-face with kidnappers, serial killers, stalkers, and terrorists. With his expertise and insight, Dr Mohandie analyses and evaluates the thought processes that motivate the most dangerous people who have ever walked among us.

Born Killers?: Inside the minds of the world's most depraved criminals by Dr Kris Mohandie

With his expertise and insight, Dr Mohandie analyses and evaluates the thought processes that motivate the most dangerous people who have ever walked among us.

This is the first-hand account of his work, covering shocking cases like the 'Angel of Death' serial killer, racist serial assassin Joseph Paul Franklin, and even the O.J. Simpson case.

Learn shocking new revelations about hostage takers, serial killers, mass murderers, violent 'true-believers', terrorists, and some of the worst predators on the planet.

***Previously published in the US as Evil Thoughts, Wicked Deeds.

'I have worked with Dr Mohandie for many years, managing and resolving high risk hostage-taking and barricaded subject incidents. He is a true subject matter expert who I depended on when critical life and death decisions were needed during unfolding and prolonged crisis. His understanding and insight into the behaviour of subjects who are in personal crisis and/or predators cannot be overstated. His book shares with the reader the detailed dynamics associated with sinister behaviour and crime that is captivating. It is a must-read for those who have an interest in the behind-the-scenes work and effort done by law enforcement and mental health professionals.' Michael Albanese

'When I needed an expert to help understand a stalker, I turned to Kris Mohandie. His work as a police psychologist has put him on the scene of dramatic stand-offs and inside the heads of the disturbed, stressed and psychopathic. Born Killers? is both a fascinating and terrifying story.' Erin Moriarty

'Dr. Mohandie's ability to blend his professional expertise, personal life experiences, and storytelling ability takes you into the mind of some of the most dangerous criminals this country has ever seen. Born Killers? is a must-read for anyone who wants to immerse themselves in the world of forensic psychology through the eyes of one of the best in the business.' Derrick Levasseur, detective, author, and TV personality

Worrying about the safety of the Lakers fans, players and staff has given me many sleepless nights. I have sought out the expertise and guidance of Dr Kris Mohandie in regards to threat assessment, but acknowledge that the risk is an everyday reality for all. This book is a must-read as we continue to shift our collective mindset to accepting that violence can occur any place at any time - we must be prepared.' Jeanie Buss, CEO and Governor, Los Angeles Lakers

'A prosecutor in a stalking case knows that jury wants to know: Why? Dr Mohandie answers that question about some of the most notorious criminal cases in America's history. Just like he did in the courtroom and during investigations, Kris brings these infamous cases to life in a way that explores and fascinates. He unlocks and explains the minds of killers and stalkers. This is a book that shines a light on some of the darkest shadows that lurk in the world around us.' Judge Scott Gordon (Ret.), Founding member, Stalking and Threat Assessment Team, LA County District Attorney's Office

Dr. Kris Mohandie is a clinical, police, and forensic psychologist with over thirty years of experience in the psychology of violence. He has consulted in field responses and case investigations for local, state, and federal law enforcement organisations including the LAPD and the FBI. He has consulted on and testified in numerous extreme violence and homicide cases, including single, mass, and serial homicide cases. Dr. Mohandie has conducted extensive trial pending and prison interviews of violent offenders, including a number of stalkers, hostage takers, workplace and school violence perpetrators, and serial and multiple murderers. His work has been featured in the New York Times, USA Today, and LA Times, and he has appeared in the news programs of CNN, ABC- 20/20, CBS, NBC- 48 Hours, BBC, and Fox, as well as programs on Investigative Discovery, A&E, History, and the Discovery Channel. He was the host and a producer on the Investigative Discovery show, Most Evil, and the 2018 series Breaking Homicide.
GOR010841216
9781913406141
1913406148
Born Killers?: Inside the minds of the world's most depraved criminals by Dr Kris Mohandie
Dr Kris Mohandie
Used - Very Good
Paperback
Mirror Books
20200903
N/A
Book picture is for illustrative purposes only, actual binding, cover or edition may vary.
This is a used book - there is no escaping the fact it has been read by someone else and it will show signs of wear and previous use. Overall we expect it to be in very good condition, but if you are not entirely satisfied please get in touch with us
Trustpilot