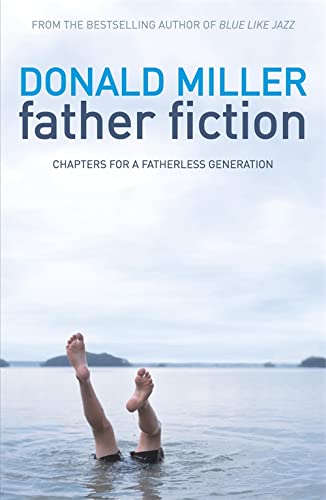 A memoir with a message, this book shares the angst of a boy growing up without a father and how he found his way.

Donald Miller's dad left when he was very young. From that point onwards, Donald felt different. Different from the other boys in his class; different from the other boys at camp. He discovered that growing up without a father to show him the ropes is hard work. Dads have crucial wisdom to impart to their sons, but without one, life seems a whole lot harder.
With honest humour and raw self-revelation, bestselling author Donald Miller talks about growing up without a father and discusses the issues that befall the 'fatherless generation'. Miller shares his journey from self-pity and brokenness to hope and strength, providing guidance for the growing numbers of young adults floundering in an age with fewer and fewer positive domestic male role models.
This amusing, but ultimately inspiring memoir provides encouragement for both men and women who've grown up with absent fathers, as well as the wives, girlfriends and friends of those with a similar story.

There are many books you just taste. Some you snack on. And then there are the few that you savour and devour. Donald Miller's new autobiographical narrative, Father Fiction, is a rich and memorable feast for anyone concerned about fatherlessness. It is a story that you will relish not just once but many times and it is an absolute must-read for those who want to make a loving stand against the demise of fatherhood. * Dr Mark Stibbe, founder and leader of the Father's House Trust, and bestselling author *

Donald Miller grew up in Houston, Texas, in the shadow of the Astrodome. He left Houston at 21 in a Volkswagen van and travelled through America stopping in Portland, Oregon where he audited classes at Reed College, then selected as the most godless campus in the country. His books Through Painted Deserts and the New York Times bestselling Blue Like Jazz came out of his travels, and Don followed those up with Searching for God Knows What.

Then after thirty years of no interaction with his father, Don found his biological Dad and wrote about it in a book called FATHER FICTION. About that time, he started The Mentoring Project, an organization that seeks to inspire and equip faith communities to mentor fatherless boys. Don`s work with The Mentoring Project led the Obama administration to invite him onto the Presidential Task Force on Fatherhood and Healthy Families. Last year, along with the Ride:Well Team, Don rode his bicycle across America in an effort to raise money to drill wells in Sub-Saharan Africa. This experience provided material for his newest book, A Million Miles in a Thousand Years (also a New York Times bestseller).

Donald Miller is a sought-after speaker. He has appeared at such diverse events as The Democratic National Convention and the Veritas Forum at Harvard. He lives in Portland, Oregon with his dog Lucy.

GOR003966051
9781444701319
1444701312
Father Fiction: Chapters for a Fatherless Generation by Professor Donald Miller
Professor Donald Miller
Used - Very Good
Paperback
Hodder & Stoughton General Division
2011-05-26
208
N/A
Book picture is for illustrative purposes only, actual binding, cover or edition may vary.
This is a used book - there is no escaping the fact it has been read by someone else and it will show signs of wear and previous use. Overall we expect it to be in very good condition, but if you are not entirely satisfied please get in touch with us
Trustpilot