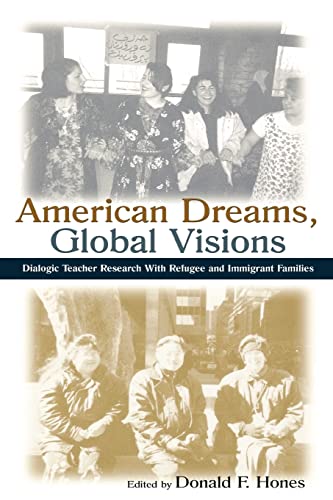 This book presents the struggle for dialogue and understanding between teachers and refugee and immigrant families, in their own words. Forging a stronger connection between teachers, newcomers, and their families is one of the greatest challenges facing schools in the United States. Teachers need to become familiar with the political, economic, and sociocultural contexts of these newcomers' lives, and the role of the U.S. in influencing these contexts in positive and negative ways.

The important contribution of American Dreams, Global Visions is to bring together global issues of international politics and economics and their effects on migration and refugee situations, national issues of language and social policy, and local issues of education and finding ways to live together in an increasingly diverse society.

Narratives of four immigrant families in the United States (Hmong, Mexican, Assyrian/Kurdish, Kosovar) and the teacher-researchers who are coming to know them form the heart of this work. The narratives are interwoven with data from the research and critical analysis of how the narratives reflect and embody local, national, and global contexts of power. The themes that are developed set the stage for critical dialogues about culture, language, history, and power.

Central to the book is a rationale and methodology for teachers to conduct dialogic research with refugees and immigrants--research encompassing methods as once ethnographic, participatory, and narrative--which seeks to engage researchers and participants in dialogues that shed light on economic, political, social, and cultural relationships; to represent these relationships in texts; and to extend these dialogues to promote broader understanding and social justice in schools and communities.

American Dreams, Global Visions will interest teachers, social workers, and others who work with immigrants and refugees; researchers, professionals, and students across the fields of education, language and culture, ethnic studies, American studies, and anthropology; and members of the general public interested in learning more about America's most recent newcomers. It is particularly appropriate for courses in foundations of education, multicultural education, comparative education, language and culture, and qualitative research.

"The essence of this book is to promote broader understanding and social justice in schools and communities. This work also hopes to alleviate the challenge of dialogue between teachers and those whose cultural backgrounds they seek to understand. Most importantly, it is designed to bridge school, community, and family. This work makes an excellent contribution to effective multicultural teaching and learning."
-Multicultural Review

"Both pre- and in-service educators, graduate and undergraduate students, contributed to this eloquently written resource for those current and future professionals providing services and support to immigrants and refugees from around the globe....Scattered throughout the text are valuable tables, maps, illustrations, and photographs that provide readers with visual representations of population statistics, geography, and the day-to-day experiences of the most recent newcomers to the U.S....This powerful text is a must-read and would fit well in teacher education, anthropology, and language/culture courses."
-TESL-EJ

"This book is truly important for teacher education and is beautifully written to capture the experiences and emotions of teachers/researchers and immigrant community members....It shows how teachers' journeys as border crossers can bring much insight into bridging homes and school. It calls for reflection, responsibility, and action and in this way is a significant contribution to the field of education."
-Sophia Villenas
University of Utah