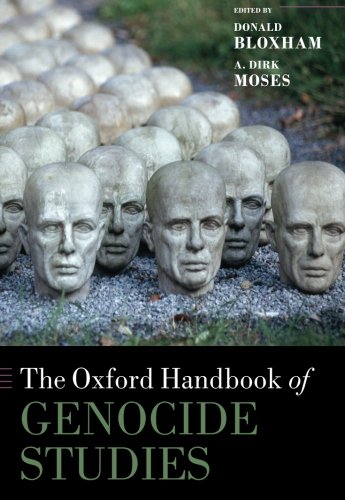 The Oxford Handbook of Genocide Studies by Donald Bloxham (Professor of Modern History, University of Edinburgh)

The first book to subject both genocide and this young discipline to systematic, in-depth analysis. Thirty-four renowned experts study genocide world-wide through the ages by taking regional, thematic, and disciplinary approaches.

The Oxford Handbook of Genocide Studies by Donald Bloxham (Professor of Modern History, University of Edinburgh)

Genocide has scarred human societies since Antiquity. In the modern era, genocide has been a global phenomenon: from massacres in colonial America, Africa, and Australia to the Holocaust of European Jewry and mass death in Maoist China. In recent years, the discipline of 'genocide studies' has developed to offer analysis and comprehension. The Oxford Handbook of Genocide Studies is the first book to subject both genocide and the young discipline it has spawned to systematic, in-depth investigation. Thirty-four renowned experts study genocide through the ages by taking regional, thematic, and disciplinary-specific approaches. Chapters examine secessionist and political genocides in modern Asia. Others treat the violent dynamics of European colonialism in Africa, the complex ethnic geography of the Great Lakes region, and the structural instability of the continent's northern horn. South and North America receive detailed coverage, as do the Ottoman Empire, Nazi-occupied Europe, and post-communist Eastern Europe. Sustained attention is paid to themes like gender, memory, the state, culture, ethnic cleansing, military intervention, the United Nations, and prosecutions. The work is multi-disciplinary, featuring the work of historians, anthropologists, lawyers, political scientists, sociologists, and philosophers. Uniquely combining empirical reconstruction and conceptual analysis, this Handbook presents and analyses regions of genocide and the entire field of 'genocide studies' in one substantial volume.
... a helpful overview of some of the terminology and case studies involved in this important, and sadly increasingly topical and growing field * Peter Admirand, Marx & Philosophy *
Review from previous edition Should reside on the desk of every Holocaust and genocide scholar, as well as in all academic libraries. It is invaluable in both its comprehensiveness and its specificity. * Journal of Interdisciplinary History *
Donald Bloxham is Professor of Modern History at Edinburgh University, and studies the perpetration, punishment and representation of genocide. He is author of The Final Solution: A Genocide (2009), The Great Game of Genocide: Imperialism, Nationalism, and the Destruction of the Ottoman Armenians (2005), which won the 2007 Raphael Lemkin prize for genocide scholarship, Genocide on Trial: War Crimes Trials and the Formation of Holocaust History and Memory (2001), all published by Oxford University Press, and is co-author of The Holocaust: Critical Historical Approaches (2005) with Tony Kushner. A. Dirk Moses is Associate Professor of History at the University of Sydney. His interests are in world history, genocide, the United Nations, colonialism/imperialism and terror, about which he has published a number of anthologies. His book on postwar German debates about the recent past appeared as German Intellectuals and the Nazi Past (Cambridge, 2007), winner of the H-Soz-u-Kult prize for contemporary history in 2008.
PART I: CONCEPTS; PART II: INTERDISCIPLINARY PERSPECTIVES; PART III: PREMODERN AND EARLY MODERN GENOCIDE; PART IV: GENOCIDE IN THE LATE MODERN WORLD; PART V: THE CONTEMPORARY WORLD: RULES AND RESPONSES
NPB9780199677917
9780199677917
0199677913
The Oxford Handbook of Genocide Studies by Donald Bloxham (Professor of Modern History, University of Edinburgh)
Donald Bloxham (Professor of Modern History, University of Edinburgh)
Oxford Handbooks
New
Paperback
Oxford University Press
2013-05-02
696
N/A
Book picture is for illustrative purposes only, actual binding, cover or edition may vary.
This is a new book - be the first to read this copy. With untouched pages and a perfect binding, your brand new copy is ready to be opened for the first time
Trustpilot