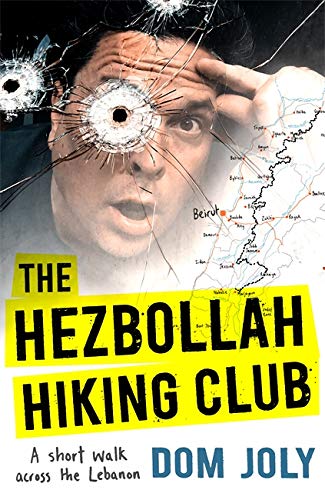 The Hezbollah Hiking Club is a comedic travelogue in which Dom Joly and his two best friends hike across Lebanon. It's three men on a camel . . . without the camel.

The Hezbollah Hiking Club: A short walk across the Lebanon by Dom Joly

Welcome to the Hezbollah Hiking Club . . .

At a boozy, cricket-filled afternoon at Lord's, Dom Joly convinces his two closest friends to agree to the unthinkable: a challenging hike across Lebanon, from the Israeli border in the south, along the spine of the country's mountain range, all the way to the Syrian border in the north. For Joly it is something of a homecoming, having grown up in Beirut. It was a happy childhood, though he did go to school with Osama bin Laden.

Arriving in Lebanon armed with copious amounts of Vaseline - and no walking experience, bar taking the dog for the occasional stroll - Dom, Chris and Harry don't quite know what they've got themselves into. Joined by their bemused chaperone Caroll, they meet a variety of characters along the way including Ali, a stony-faced Hezbollah Museum guide who seems unperturbed by circling Israeli jets, and part-time Londoner Raf, who challenges Dom and the boys to a brain-freeze drinking contest. From a hair-raising creep along the 'Valley of the Skulls' to accidentally flashing an unsuspecting Ethiopian cook, the three friends just about manage to keep going.

With more than a smattering of persiflage and some cringe-worthy moments, The Hezbollah Hiking Club is a big-hearted, witty and affectionate love letter to Lebanon and its rich history with a meditation on family and homeland at its heart. Written with Dom's trademark humour, it is a paean to both the simple joys of friendship and to growing old disgracefully.

Dom Joly is a multi-award-winning television comedian, has been a columnist for the Independent, I and Metro, and is also an award-winning travel writer for the Sunday Times and the Mail On Sunday. He lives in the Cotswolds with his wife and two kids.
GOR009876472
9781472128447
1472128443
The Hezbollah Hiking Club: A short walk across the Lebanon by Dom Joly
Dom Joly
Used - Very Good
Hardback
Little, Brown Book Group
2019-06-13
320
N/A
Book picture is for illustrative purposes only, actual binding, cover or edition may vary.
This is a used book - there is no escaping the fact it has been read by someone else and it will show signs of wear and previous use. Overall we expect it to be in very good condition, but if you are not entirely satisfied please get in touch with us
Trustpilot