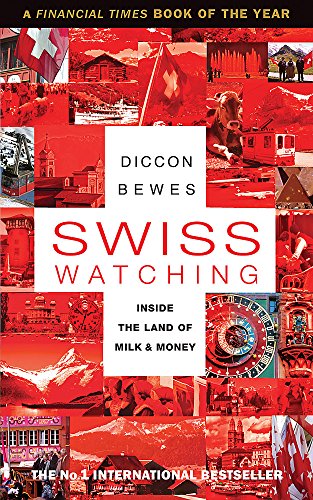 Swiss Watching is a fascinating journey around Europe's most individual and misunderstood country. Diccon Bewes proves that there's more to Switzerland than banks and skis, francs and cheese. New updated edition, new statistics and Epilogue.

Swiss Watching: Inside the Land of Milk and Money by Diccon Bewes

A FINANCIAL TIMES BOOK OF THE YEAR

One country, four languages, 26 cantons, and 7.5 million people (but only 80% of them Swiss): there's nowhere else in Europe like it. Switzerland may be almost 400 km from the nearest drop of seawater, but it is an island at the centre of Europe. Welcome to the landlocked island.

Swiss Watching is a fascinating journey around Europe's most individual and misunderstood country. From seeking Heidi and finding the best chocolate to reliving a bloody past and exploring an uncertain future, Diccon Bewes proves that there's more to Switzerland than banks and skis, francs and cheese. This book dispels the myths and unravels the true meaning of Swissness.

In a land of cultural contradictions, this is a picture of the real and normally unseen Switzerland, a place where the breathtaking scenery shaped a nation not just a tour itinerary, and where tradition is as important as innovation. It's also the story of its people, who have more power than their politicians, but can't speak to one another in the same language and who own more guns per head than the people of Iraq. As for those national cliches, well, not all the cheese has holes, cuckoo clocks aren't Swiss and the trains don't always run exactly on time.

We all know that Switzerland gave us the world of cuckoo clocks, triangular chocolate and penknives, but how about the Toilet Duck, Velcro and LSD? Europe's landlocked island is a great subject for a cultural anthropologist and Bewes is a perfect guide. * Financial Times, Book of the Year *
Bewes has an engagingly light and comic touch. The narrative moves with ease between subjects as diverse as graffiti and recycling, and it's easy to dip in and out of. * The Sunday Telegraph *
Informative and entertaining. -- Harry Ritchie * The Mail on Sunday *
Diccon Bewes has the Bryson touch, informing and entertaining readers with his observations, considerable knowledge and love for this little-known country. * LoveReading, Travel Book of the Month *
It's a real page turner, a treasure trove. Absolutely jam-packed with fascinating facts that really got me thinking. -- Margaret Oertig-Davidson, author of Beyond Chocolate
Everything you wanted to know about Switzerland, and then some. Not just a travel book, Swiss Watching is a no-stone-unturned exploration of what makes (and has made) this enigmatic country tick. -- Peter Kerr, author of the Snowball Orange series
A fascinating book, teeming with facts, figures, and anecdotes which even the Swiss don't know. A journalist, anthropologist and satirist, Diccon Bewes gives us a book that is serious without being academic and funny without ever falling into caricature. * L'Hebdo *
Diccon Bewes is a travel writer. A world trip set him up for a career in travel writing, via the scenic route of bookselling. After ten years at Lonely Planet and Holiday Which? Magazine, he decamped to Switzerland, where he managed the Stauffacher English Bookshop in Bern. In addition to grappling with German, re-learning to cross the road properly, and overcoming his desires to form an orderly line, he has spent years exploring Switzerland. Following the incredible success of Swiss Watching he is now a full time writer. See his website at www.dicconbewes.com
GOR004462845
9781857885873
1857885872
Swiss Watching: Inside the Land of Milk and Money by Diccon Bewes
Diccon Bewes
Used - Very Good
Paperback
Hodder & Stoughton General Division
2006-12-20
336
N/A
Book picture is for illustrative purposes only, actual binding, cover or edition may vary.
This is a used book - there is no escaping the fact it has been read by someone else and it will show signs of wear and previous use. Overall we expect it to be in very good condition, but if you are not entirely satisfied please get in touch with us
Trustpilot