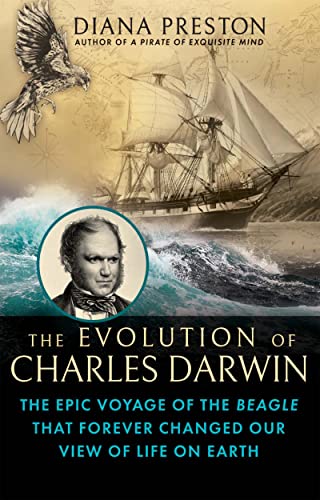 The Evolution of Charles Darwin by Diana Preston

The Evolution of Charles Darwin: The Epic Voyage of the Beagle That Forever Changed Our View of Life on Earth by Diana Preston

From the Los Angeles Times Book Prize-winning historian, the colorful, dramatic story of Charles Darwin's journey on HMS Beagle that inspired the evolutionary theories in his path-breaking books On the Origin of Species and The Descent of Man

When twenty-two-year-old aspiring geologist Charles Darwin boarded HMS Beagle in 1831 with his microscopes and specimen bottles-invited by ship's captain Robert FitzRoy who wanted a travel companion at least as much as a ship's naturalist-he hardly thought he was embarking on what would become perhaps the most important and epoch-changing voyage in scientific history. Nonetheless, over the course of the five-year journey around the globe in often hard and hazardous conditions, Darwin would make observations and gather samples that would form the basis of his revolutionary theories about the origin of species and natural selection.

Drawing on a rich range of revealing letters, diary entries, recollections of those who encountered him, and Darwin's and FitzRoy's own accounts of what transpired, Diana Preston chronicles the epic voyage as it unfolded, tracing Darwin's growth from untested young man to accomplished adventurer and natural scientist in his own right. Darwin often left the ship to climb mountains, navigate rivers, or ride hundreds of miles, accompanied by local guides whose languages he barely understood, across pampas and through rainforests in search of further unique specimens. From the wilds of Patagonia to the Galapagos and other Atlantic and Pacific islands, as Preston vibrantly relates, Darwin collected and contrasted volcanic rocks and fossils large and small, witnessed an earthquake, and encountered the Argentinian rhea, Falklands fox, and Galapagos finch, through which he began to discern connections between deep past and present.

Darwin never left Britain again after his return in 1836, though his mind journeyed far and wide to develop the theories that were first revealed, after great delay and with trepidation about their reception, in 1859 with the publication of his epochal book On the Origin of Species. Offering a unique portrait of one of history's most consequential figures, The Evolution of Charles Darwin is a vital contribution to our understanding of life on Earth.

Praise for The Evolution of Charles Darwin:

An exciting biography of the immortal naturalist's legendary journey . . . It was well into the 20th century before essentially all scientists agreed that Darwin was on the right track. Since then, biographies have poured off the presses, but readers cannot go wrong with this expert account. An irresistible scientific biography and adventure story with a happy ending.-Kirkus Reviews (starred review)

Praise for Eight Days at Yalta:

A colorful chronicle of high-stakes negotiations and a study in human frailties, missteps, and ideological blunders.-Washington Post

Ms. Preston's conference narrative abjures authorial hindsight judgments, placing the spotlight instead on the characters' natural blind spots and biases. She also devotes a full third of the book to the summit's historical context and personalities, the latter of which are nicely developed.-Wall Street Journal

A highly readable, highly detailed account of the historic meetings and often difficult and contentious negotiations between Churchill, Roosevelt, Stalin, and their staffs, and a vivid description of the once ornate Tsarist palaces and their much deteriorated wartime condition that served as the setting for meetings, dinners, and private talks.-New York Journal of Books

Lively and nuanced . . . Shrewd on the main personalities . . . Preston goes beyond the horse-trading of three old men, with vivid scene-setting of the tsarist palaces where the conference took place.-Times (UK)

In this well-written and absorbing book, Diana Preston provides a chronological narrative of these crucial eight days.-Airmail

On the Yalta conference's 75th anniversary, this insightful history recounts its enormous, if teeth-gnashing, accomplishments . . . Impressively researched . . . An expert account of an unedifying milestone at the dawn of the Cold War.-Kirkus Reviews

[A] spirited, behind-the-scenes account of the February 1945 Yalta Conference. Preston mixes foreign policy critique . . . with vibrant descriptions of backstage activities . . . Colorful personalities, piquant details, and a diverse array of perspectives make this a satisfying introduction to the subject.-Publishers Weekly

A treasure map of a book.-San Diego Union-Tribune, on A Pirate of Exquisite Mind

A superbly rendered popular history.-Booklist (starred review), on A Pirate of Exquisite Mind

Unforgettable . . . The definitive account of the Lusitania.-Philadelphia Inquirer, on Lusitania: An Epic Tragedy

As majestic as its subject . . . Extraordinarily readable.-Chicago Sun-Times, on Lusitania: An Epic Tragedy

An engaging narrative . . . Rich in detail and texture.-San Diego Union Tribune, on Before the Fallout: From Marie Curie to Hiroshima

Ultimately this book is about survival, and the author engagingly recounts the nearly impossible task of trying to establish a penal colony with few supplies and poor agricultural conditions. Preston shines in her description of the true nature of Captain Bligh . . . A wonderful look into the beginnings of Australia and the remarkable strength of the survivors of these dangerous voyages.-Kirkus Reviews, on Paradise in Chains

DIANA PRESTON is a prize-winning historian and the author of Eight Days at Yalta, A Higher Form of Killing, Lusitania: An Epic Tragedy, Before the Fallout: From Marie Curie to Hiroshima (winner of the Los Angeles Times Book Prize for Science and Technology), The Boxer Rebellion, Paradise in Chains, and A Pirate of Exquisite Mind, among other works of acclaimed narrative history. She and her husband, Michael, live in London.

GOR012692686
9780802160188
0802160182
The Evolution of Charles Darwin: The Epic Voyage of the Beagle That Forever Changed Our View of Life on Earth by Diana Preston
Diana Preston
Used - Very Good
Hardback
Grove Press / Atlantic Monthly Press
2022-11-17
448
N/A
Book picture is for illustrative purposes only, actual binding, cover or edition may vary.
This is a used book - there is no escaping the fact it has been read by someone else and it will show signs of wear and previous use. Overall we expect it to be in very good condition, but if you are not entirely satisfied please get in touch with us
Trustpilot