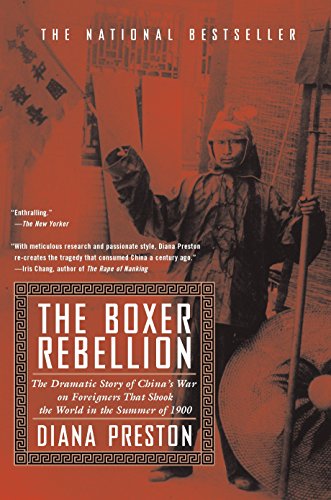 Boxer Rebellion: The Dramatic Story of China's War on Foreigners that Shook the World in the Summ er of 1900 by Diana Preston

Chinese peasants chafed against the foreign technologies and ideas that the imperialists introduced. Then a new movement-mystical, materialistic, and virulently anti-Christian-began to spread among them like wildfire. The foreigners laughed at the peasants' martial-arts routines and nicknamed them the Boxers-never imagining that the group, with the backing of China's empress dowager, would soon terrorize the world...This acclaimed account of the Boxer Rebellion, by an Oxford-trained historian, is an important new addition to every shelf of high-quality, highly accessible history.
Enthralling.-The New Yorker

With meticulous research and passionate style, Diana Preston recreates the tragedy that consumed China a century ago.-Iris Chang, author of The Rape of Nanking

Fascinating...penned with an obvious addiction to the delicious little details of history: whimsical, outrageous and macabre.-The Washington Post

A dramatic narrative that can be read on the beach or in the classroom...well-researched and lavishly descriptive accounts.-The Christian Science Monitor

A nail-biting example of narrative history at its best...Preston knows precisely which colorful details will spice up this masterful mix of history, gossip, crystal-clear military strategy and ironic observations about colonial and imperial politiciking-and she keeps the pot at an irresistibly lively boil throughout.-Salon.com

Diana Preston's dramatic retelling of the summer-long siege of the Peking foreign district 100 years ago-'a pivotal episode in China's fractured relationship with the West'-does much to clarify China's enduring resentment toward foreign interference...Preston's account, compiled from the many letters, diaries, and memoirs by European survivors of the siege, captures an odd strain of mordant humor.-The New York Times Book Review

A colorful and well-presented treatment of a crucial turning point in history. -Kirkus Reviews (starred review)

Well-researched and well-told...brings to light the details of this obscure yet culturally significant event. Her stirring account, culled from the letters, diaries, and memoirs of the foreign survivors, shows exactly what it was like after June 20, 1900, when the Boxers and regular Chinese soldiers laid siege to foreign embassies...The vivid eyewitness accounts place the reader in the middle of events. And by shedding light on this important episode in past China-West relations, Preston goes a long way in explaining China's current suspicious attitude toward the world.-Houston Chronicle

Diana Preston is an Oxford-trained historian, writer, and broadcaster who lives in London, England. She is the author of The Road to Culloden Moor: Bonnie Prince Charlie and the '45 Rebellion and A First Rate Tragedy: Robert Falcon Scott and the Race to the South Pole.
The Boxer RebellionPrologue

I. The Poison in the Well:
China on the Eve of the Boxer Rebellion

6. A Failed Rescue
7. City of Mud and Fire
8. Behind the Tartar Wall
9. The Drifting Horror
10. The Darkest Night

IV. Murder, Rape, and Exile:
Scenes from the Boxer Summer

15. Tour of Inspection
16. The Island of the Peitang
17. The Faith and Fate of the Missionaries
18. The Spoils of Peking

V. Another Country?
China in the Wake of the Boxer Rebellion

GOR005818321
9780425180846
0425180840
Boxer Rebellion: The Dramatic Story of China's War on Foreigners that Shook the World in the Summ er of 1900 by Diana Preston
Diana Preston
Used - Very Good
Paperback
Penguin Putnam Inc
20010701
464
N/A
Book picture is for illustrative purposes only, actual binding, cover or edition may vary.
This is a used book - there is no escaping the fact it has been read by someone else and it will show signs of wear and previous use. Overall we expect it to be in very good condition, but if you are not entirely satisfied please get in touch with us
Trustpilot