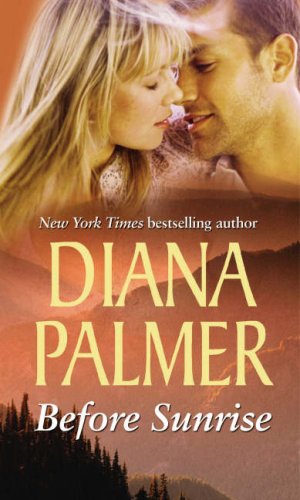 Before Sunrise by Diana Palmer

Jeremiah Cortez thought he'd left the past behind him-especially the part of his past concerning Phoebe Keller.

Before Sunrise by Diana Palmer

Jeremiah Cortez thought he'd left the past behind him-especially the part of his past concerning Phoebe Keller.

Once she had stirred his world-weary soul. Now, years later, seeing the blond beauty again sparks dormant desires. But he has to push his emotions aside-he has new ties that can't be broken. Phoebe thought her feelings for Cortez were buried as deep as the artifacts she studies in her museum.

An expert in Native American culture, she has her doubts when an anthropologist claims to have discovered a Neanderthal skeleton on a nearby reservation. But before Phoebe can pursue the matter, the professor in question turns up dead-and the FBI sends Cortez to investigate.

Now, as the two delve further into the murder, they find themselves entangled in a world of conspiracy, deception...and a love more powerful than anything they've ever known.

"Sensual and suspenseful... The ever-popular and prolific Palmer has penned another sure hit." - Booklist "...romantic complications draw the reader in." - Romantic Times"

The prolific author of more than one hundred books, Diana Palmer got her start as a newspaper reporter. A New York Times bestselling author and voted one of the top ten romance writers in America, she has a gift for telling the most sensual tales with charm and humor. Diana lives with her family in Cornelia, Georgia.

GOR001169480
9780263856958
026385695X
Before Sunrise by Diana Palmer
Diana Palmer
Used - Very Good
Paperback
HarperCollins Publishers
2007-04-01
384
N/A
Book picture is for illustrative purposes only, actual binding, cover or edition may vary.
This is a used book - there is no escaping the fact it has been read by someone else and it will show signs of wear and previous use. Overall we expect it to be in very good condition, but if you are not entirely satisfied please get in touch with us
Trustpilot