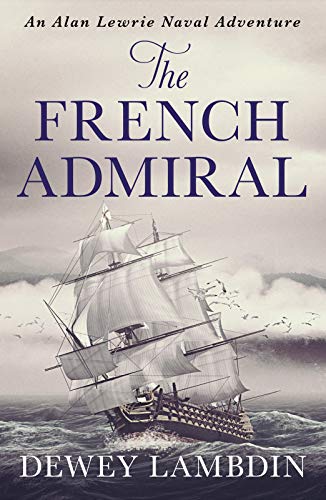 The French Admiral by Dewey Lambdin

The French Admiral by Dewey Lambdin

Embroiled in war, Alan Lewrie is in for the fight of his life

After being shipped off to the navy, Alan Lewrie has found his sea legs. Although a stark contrast to the social whirl of London, his rise in status to naval officer rather suits him.

When, alongside the crew of the Desperate, he finds himself entangled in the siege of Yorktown, he is forced to fight for his life. But rescuing a loyalist family, along with their attractive daughter Caroline, gets Lewrie in even hotter water...

The second action-packed instalment of The Alan Lewrie Naval Adventures is perfect for fans of Philip McCutchan, Julian Stockwin and Patrick O'Brian.

The Alan Lewrie Naval Adventures
Dewey Lambdin is an American nautical historical novelist. He is best known for his Alan Lewrie Naval Adventures series, spanning the American Revolution and the Napoleonic Wars. A member of the U.S. Naval Institute and a Friend of the National Maritime Museum in Greenwich, England, he spends his free time working and sailing. Besides the Alan Lewrie series, he is also the author of What Lies Buried: a novel of Old Cape Fear.
GOR009996630
9781788634038
1788634039
The French Admiral by Dewey Lambdin
Dewey Lambdin
The Alan Lewrie Naval Adventures
Used - Very Good
Paperback
Canelo
2019-04-11
400
N/A
Book picture is for illustrative purposes only, actual binding, cover or edition may vary.
This is a used book - there is no escaping the fact it has been read by someone else and it will show signs of wear and previous use. Overall we expect it to be in very good condition, but if you are not entirely satisfied please get in touch with us
Trustpilot