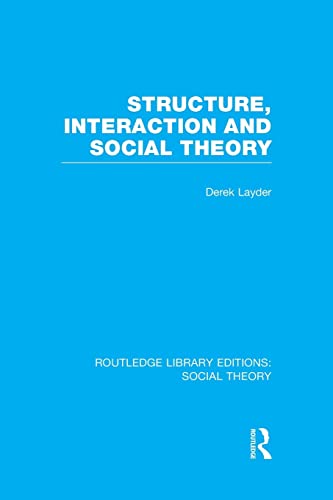 A central problem in contemporary social theory is that of providing an account of social interaction that does justice both to the self-monitoring capacities of the individuals involved and to the society that 'frames' the interaction. This book attempts to resolve this problem, arguing for an objectivist or 'structuralist' account which does not undervalue the importance of the indexical and negotiated aspects of interaction, and which takes seriously the Marxist-rationalist critique of empiricism and humanism and the associated idea that society should be treated as a supra-individual, preconstituted and constraining object of scientific analysis.

First, Dr Layder pinpoints certain of the strengths and weaknesses of various schools of thought: social psychology (scrutinized in both its sociological and psychological forms), sociology, the Marxist-rationalist approach. Whilst rejecting the mechanistic or naively deterministic theories which are often associated with an objectivist stance, he argues that the productive activities of situated actors must be understood as existing in an articulated relationship with, and within, sets of preconstituted contextual constraints. This thesis is illustrated conceptually by the development of a framework which distinguishes two types and levels of social structure, with different modes of production and reproduction, and empirically by an analysis of aspects of interaction in the occupation of acting.

NLS9781138996588
9781138996588
1138996580
Structure, Interaction and Social Theory by Derek Layder
Derek Layder
Routledge Library Editions: Social Theory
New
Paperback
Taylor & Francis Ltd
2015-12-21
164
N/A
Book picture is for illustrative purposes only, actual binding, cover or edition may vary.
This is a new book - be the first to read this copy. With untouched pages and a perfect binding, your brand new copy is ready to be opened for the first time
Trustpilot