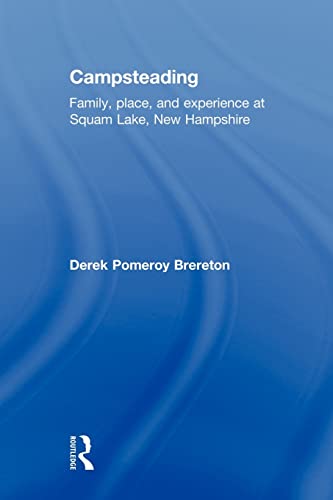 Describes and accounts for American campsteading, an institution that draws on historical trends to link families to places, and so shapes human presence on the land. This title draws on John Dewey's evolutionary model of experience to produce an analysis of this phenomenon.

The campstead is an American institution. After the Civil War, with neo-colonialism, environmentalism, and arts-and-crafts on the rise, some families sought rural locations for rustic camps. There they raised their children in the summertime. Around Squam Lake, after some eight generations, twenty-one such camps remain in these families.

The Squam area thus becomes a natural place to study relationships of persons and places, families and landscape, and humans and the world. Our present concerns for environmental stewardship, open space protection, and core values instead of consumerism, make this a good time to revisit the simple American Campstead.

Rustic camping itself revisited aspects of the American frontier. Just as the western frontier was disappearing, some families resorted to remnants of the first frontier among mountains and lakes of the Northeast. Through campsteads, these families preserved elements of the frontier ethos. Campsteads facilitate particular experiences involving nature and family. Brereton investigates campstead experience, and through it the nature of human experience generally.

This book is the first detailed account of campsteading, the first application of critical realism in anthropology, and the first anthropological use of John Dewey's evolutionary model of experience. Building on Dewey, the author further analyses experience into its levels, orders, and features.

'A book that can serve as an illustration of the fruitfulness of a critical realist approach to understanding humanness.' -Berth Danermark, in the Journal of Critical Realism, vol 10 issue 3
Derek P. Brereton teaches anthropology, sociology and evolutionary psychology at Adrian College, Michigan. He is on the editorial board of the Journal of Critical Realism and has published numerous journal articles on the subject of anthropology and critical realism.
NLS9780415592000
9780415592000
0415592003
Campsteading: Family, Place, and Experience at Squam Lake, New Hampshire by Derek Brereton (Adrian College, Michigan, USA)
Derek Brereton (Adrian College, Michigan, USA)
New
Paperback
Taylor & Francis Ltd
2010-05-12
312
N/A
Book picture is for illustrative purposes only, actual binding, cover or edition may vary.
This is a new book - be the first to read this copy. With untouched pages and a perfect binding, your brand new copy is ready to be opened for the first time
Trustpilot