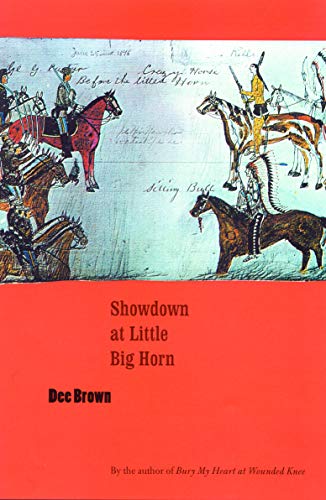 On Sunday afternoon, June 25, 1876, Gen. George Custer and 264 members of the U.S. Seventh Cavalry engaged more than 3,000 warriors of the Lakota Sioux, Arapaho, and Cheyenne nations and were killed in the ensuing battle.

Acclaimed historian Dee Brown traces the events of that day and of the weeks before, through the eyes and ears of seventeen participants from both sides, including Natives, scouts, soldiers, and civilians.

Why did Custer divide his forces? Why did he not take his regiment's Gatling guns? Why did he expect Sitting Bull to surrender without a fight? How did Sitting Bull's vision at the sun dance on the Rosebud foretell the occasion and the outcome of the battle? How did war chiefs Crazy Horse and Gall take advantage of Custer's tactical errors? And why did they preserve Custer's body from mutilation?

Showdown at Little Big Horn answers these and other questions, telling the story of the fight from many points of view, based on reports, diaries, letters, and testimony of the participants themselves. Together the accounts provide a gripping narrative of a punitive expedition gone badly awry and an assemblage of Native peoples who forestalled for a while the army's domination of the northern plains.

""A very powerful story that draws one in much the same way as a good novel: by evoking the sights, the smells, the noise, and the desperation of the battle. This is essential history for the Custer buff, or anyone interested in the Indian Wars on the Plains.""-Roundup Magazine
Dee Brown (1908-2002) was the author of thirty books of nonfiction and fiction about the American West, including the international bestseller Bury My Heart at Wounded Knee. His books The Gentle Tamers: Women of the Old Wild West, The Galvanized Yankees, and The Fetterman Massacre, are all available in Bison Books editions.
GOR011333417
9780803262188
0803262183
Showdown at Little Big Horn by Dee Brown
Dee Brown
Used - Like New
Paperback
University of Nebraska Press
2004-03-01
220
N/A
Book picture is for illustrative purposes only, actual binding, cover or edition may vary.
The book has been read, but looks new. The book cover has no visible wear, and the dust jacket is included if applicable. No missing or damaged pages, no tears, possible very minimal creasing, no underlining or highlighting of text, and no writing in the margins
Trustpilot