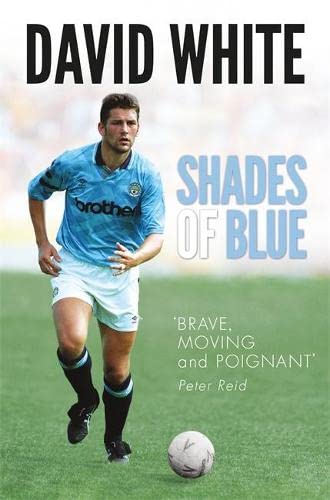 Shades of Blue by David White

This is the extraordinary story of David White, a Manchester City legend.

Shades of Blue: The Life of a Manchester City Legend and the Story that Shook Football by David White

The life of a Manchester City legend and the story that shook football.

David White was born in Manchester in 1967 with football flowing in his veins. Driven by his football-mad dad, David's prodigious talent was spotted early and he soon signed coveted schoolboy forms for Manchester City, the team that he'd supported since boyhood. A meteoric rise through the club's ranks led to his first-team debut at the age of eighteen, and he continued to light up Maine Road's right wing for the next eight years. It was a career that would take him to the heights of playing for his country.

Shades of Blue tells the story of David's extraordinary life: his passion for football, the drama of his games and his fight to outrun the shadow of that early abuse. Having spent years feeling that he had to conceal his secret in order to protect his father and his football career, it is only now that David has felt able to give a full and honest account of his life - one with a powerful message that aims to repair the damage at the very heart of the sport.

David White (Author)
David White was born on 30 October 1967 in Manchester, England. A former professional footballer, he played as a forward from 1986 to 1997. He is best remembered for his eight-year spell at Manchester City. He also played for Leeds and Sheffield United, and was capped once by England.

Joanne Lake (Author)
Joanne Lake is the co-author of I'm Not Really Here - the bittersweet story of ex-Manchester City footballer Paul Lake - which became a Sunday Times bestseller and was voted FourFourTwo's Football Book of the Year. She has recently collaborated with ex-World Cup referee Howard Webb on his memoir, The Man in the Middle, which has been long-listed for Sports Autobiography of the Year in the 2017 Cross Sports Book Awards.

GOR008165064
9781782437703
1782437703
Shades of Blue: The Life of a Manchester City Legend and the Story that Shook Football by David White
David White
Used - Very Good
Hardback
Michael O'Mara Books Ltd
2017-02-02
288
N/A
Book picture is for illustrative purposes only, actual binding, cover or edition may vary.
This is a used book - there is no escaping the fact it has been read by someone else and it will show signs of wear and previous use. Overall we expect it to be in very good condition, but if you are not entirely satisfied please get in touch with us
Trustpilot