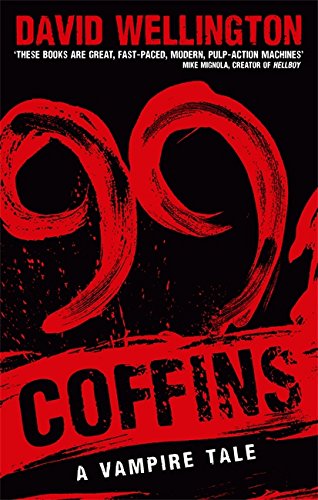 Laura Caxton vowed never to face them again. The horror of what the vampires did is too close, the wounds too fresh. But when Jameson Arkeley comes to her with an unfathomable discovery, her resolve crumbles. Arkeley leads Caxton to a recently excavated tomb in Gettysburg. While the town, with its legendary role in the Civil War's worst battle, is no stranger to cemeteries, this one is remarkably, eerily different. In it lie one hundred coffins - ninety-nine of them occupied by vampires, who, luckily, are missing their hearts. But one of the coffins is empty and smashed to pieces.

Who is the missing vampire? And does he have access to the ninety-nine hearts that, if placed back in the bodies of their owners, could reanimate an entire bloodthirsty army. The answers lie in Civil War documents that contain sinister secrets about the newly found coffins - secrets that Laura Caxton is about to uncover as she is thrown into the deadly, gruesome mission of saving an entire town from a mass invasion of the undead . . .

David Wellington was born in Pittsburgh, Pennsylvania, where George Romero shot his classic zombie films. He attended Syracuse University and received an MFA in creative writing from Penn State. He lives in New York City.
GOR008592110
9780749954314
0749954310
99 Coffins: Number 2 in series by David Wellington
David Wellington
Laura Caxton Vampire
Used - Like New
Paperback
Little, Brown Book Group
2011-06-02
400
N/A
Book picture is for illustrative purposes only, actual binding, cover or edition may vary.
The book has been read, but looks new. The book cover has no visible wear, and the dust jacket is included if applicable. No missing or damaged pages, no tears, possible very minimal creasing, no underlining or highlighting of text, and no writing in the margins
Trustpilot