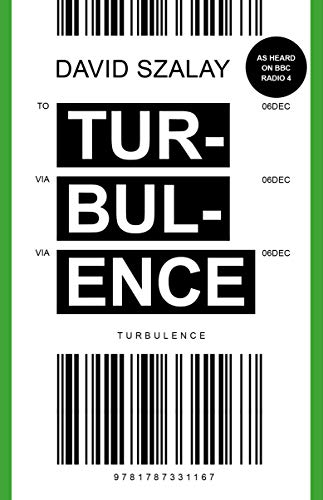 The brilliant new short story sequence from the Man Booker-shortlisted author of All That Man Is*Shortlisted for the Edge Hill Short Story Prize 2019* Twelve people on the move around planet Earth, twelve individual lives, each in turmoil, and each in some way touching the next.

The brilliant new short story sequence from the Man Booker-shortlisted author of All That Man Is *Shortlisted for the Edge Hill Short Story Prize 2019* Twelve people on the move around planet Earth, twelve individual lives, each in turmoil, and each in some way touching the next. In this nuanced and deeply moving sequence, David Szalay's diverse protagonists circumnavigate the world in twelve plane journeys, from London to Madrid, from Dakar to Sao Paulo, to Toronto, to Delhi, to Doha, en route to see lovers and parents, children and siblings, or nobody at all. Along the way, Szalay deftly depicts the ripple effect that, knowingly or otherwise, a person's actions have on those around them, and invites us to consider our own place in the vast and delicately balanced network of human relationships that is the world we live in today.
"More tales of mortality from a master of the genre... [Turbulence] is a chilling achievement." -- David Sexton * Evening Standard *
"A portrait of our species at a time of crisis... Szalay is our greatest chronicler of these rootless, tradeworn places, and the desperate, itinerant lives of those who inhabit them." -- Alex Preston * Observer *
"Ingenious... [David Szalay] knows about people... Stark and spare, Turbulence is an impressive novel." -- Brian Martin * Spectator *
"Reading David Szalay is like receiving a series of electric shocks: his preference for short, sharp sketches, rather than a single, linear plot, means that his books deny the reader the comforts of conventional, more languid storytelling... Szalay's stories may be over in just a matter of minutes, but they are violently, appallingly immersive." -- Claire Allfree * Daily Mail *
"As Szalay consistently uproots his reader, proliferating characters and locations, [Turbulence] could be seen as an experiment in the limits of sympathy... a practical test for the way we feel (or fail to feel) for others. Such calculated neutrality is the perfect foil to some heart-stoppingly beautiful prose... Things in this elegant, frightening, politically charged book, fall apart. They also lift off." -- Sophie Ratcliffe * Daily Telegraph *
"Szalay's gift for inhabiting entirely different lives is as remarkable and spooky as ever." -- Andrew Billen * The Times *
"[David Szalay's] mastery of form is evident: with deft touches he builds a tangible world." -- Hannah Shaddock * Radio Times *
"I was intrigued by the premise and the first story didn't disappoint, capturing that altered state which being cooped up in [an aeroplane] seems to invoke." -- Kate Chisholm * Spectator *
"Beautifully and delicately told. Each perfectly-formed story is part of a bigger narrative, as Szalay explores the way our actions influence those around us, and highlights the fact that while our technologically connected planet seems to be growing smaller, the people living upon it have grown more isolated from one another." -- Christian Lisseman * Big Issue *
"Especially striking, in Mr Szalay's recent work [Turbulence], is how easily he inhabits diverse perspectives... A willingness to leave the dots unjoined is one of the virtues that make Mr Szalay's fiction so rewarding." * Economist *
David Szalay is the author of four previous works of fiction: Spring, The Innocent, London and the South-East, for which he was awarded the Betty Trask and Geoffrey Faber Memorial prizes, and All That Man Is, for which he was awarded the Gordon Burn prize and Plimpton Prize for Fiction, and shortlisted for the Man Booker prize. Born in Canada, he grew up in London, and now lives in Budapest.
GOR009467986
9781787331167
1787331164
Turbulence by David Szalay
David Szalay
Used - Very Good
Hardback
Vintage Publishing
2018-12-03
144
N/A
Book picture is for illustrative purposes only, actual binding, cover or edition may vary.
This is a used book - there is no escaping the fact it has been read by someone else and it will show signs of wear and previous use. Overall we expect it to be in very good condition, but if you are not entirely satisfied please get in touch with us
Trustpilot