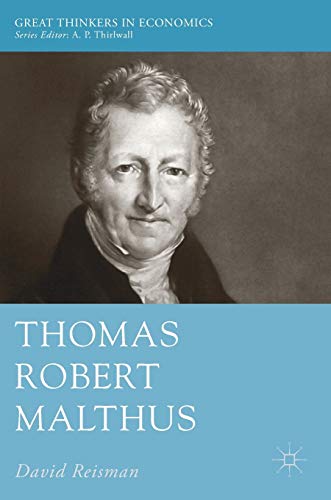 Thomas Robert Malthus (1766-1834) was a leading figure in the British classical school of economics, best-known for extending the insights of Adam Smith at a time of revolutionary improvements in agriculture and industry.

Thomas Robert Malthus (1766-1834) was a leading figure in the British classical school of economics, best-known for extending the insights of Adam Smith at a time of revolutionary improvements in agriculture and industry. This book explores the way in which he accounted for the tendency to overpopulation, the exhaustion of arable land and the deficiency of effective demand.

Malthus relied on historical and empirical evidence in the spirit of Bacon and Hume, but also backed up his data with a priori hypotheses that link him to his contemporary, David Ricardo. Malthus was strongly in favour of free trade, the minimal State, the gold standard and the abolition of poverty relief. Always a pragmatist, however, he was just as much in favour of public education, contra-cyclical public works and a safety net of tariffs and bounties to encourage national self-sufficiency with regard to food. He was both an economist and a clergyman and saw the two roles as interconnected. Malthus believed that a benevolent Deity had created vice and misery in order to shake human beings out of their natural indolence that would otherwise have condemned them to still greater distress.

This title provides a clear and comprehensive examination of Malthus's economic and social thought. It will be of interest to students and scholars alike.

NPB9783030019556
9783030019556
3030019551
Thomas Robert Malthus by David Reisman
David Reisman
Great Thinkers in Economics
New
Hardback
Springer Nature Switzerland AG
2018-10-18
312
N/A
Book picture is for illustrative purposes only, actual binding, cover or edition may vary.
This is a new book - be the first to read this copy. With untouched pages and a perfect binding, your brand new copy is ready to be opened for the first time
Trustpilot