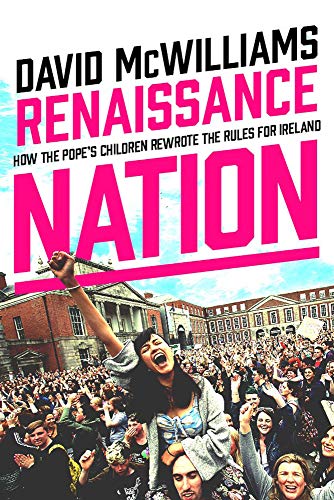 Renaissance Nation: How the Pope's Children Rewrote the Rules for Ireland by David McWilliams

In four decades, bookended by the Pope's visits to Ireland in September 1979 and August 2018, Ireland has become one of the wealthiest and most progressive nations in the world, a bustling home to multinationals and start-ups, seemingly immune to the strains of radical populism sweeping the Western world. It's a far cry from the dreary and stagnant nation of 40 years ago.

If we look at the data, but for the recent economic crash that should have but didn't derail the country for decades, the Irish economy appears to have burst from the blocks in 1990 and kept on going. So how did we manage it? How did we go from economic embarrassment to avocado toast in the space of a generation? The answer, David McWilliams compellingly argues, isn't to be found in the official records of government. Instead, this was a revolution from below, born of 'a million little mutinies' in Irish society, a wholesale shift in the way normal people see and think about themselves.

Characteristically brilliant and timely, Renaissance Nation is a thrilling account of Ireland's vertiginous rise and a timely exploration of its conflicted present, where stark decisions await the next generation of would-be revolutionaries.

David McWilliams is one of Ireland's most prominent broadcasters and columnists. Since the runaway success of his iconic publishing debut, The Pope's Children, he has emerged as one of Ireland's most prescient and trusted economic commentators. He is a regular columnist with The Irish Times and the Financial Times.
GOR009703940
9780717180752
0717180751
Renaissance Nation: How the Pope's Children Rewrote the Rules for Ireland by David McWilliams
David McWilliams
Used - Very Good
Hardback
Gill
2018-10-26
288
N/A
Book picture is for illustrative purposes only, actual binding, cover or edition may vary.
This is a used book - there is no escaping the fact it has been read by someone else and it will show signs of wear and previous use. Overall we expect it to be in very good condition, but if you are not entirely satisfied please get in touch with us
Trustpilot