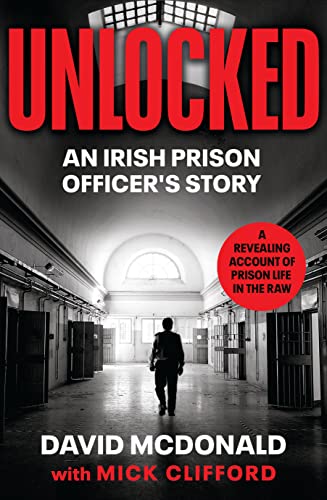 For over thirty years, David McDonald worked in Ireland's three biggest prisons. This is his story.

As a young officer, McDonald got a baptism by fire when he started in Mountjoy in 1989. It was a chaotic, smelly and overcrowded place where, inevitably, the approach to keeping order was primitive.

Returning to his hometown two years later, he entered Portlaoise, then Europe's most secure prison due to the presence of IRA and other subversive prisoners. Portlaoise and the Midlands Prison, where he moved in 2000, were also where Ireland's emerging class of serious gangsters were housed and McDonald had daily dealings with household names such as John Gilligan, Christy Kinahan, Brian Meehan, Dessie O'Hare and, latterly, killers like Graham Dwyer. McDonald also shares vivid accounts of the never-ending war of attrition with prisoners over the traffic in contraband like drugs and phones.

Though he rose through the ranks, in time McDonald came to question aspects of what is often a brutal and under-resourced system - concerns that led to him becoming a whistle-blower.

The boredom, the tension, the constant fear, the occasional flashpoints of extreme violence, the moments of comedy, of tragedy and of surprising grace are all captured here with extraordinary honesty and self-knowledge. Written with the help of award-winning journalist and author Mick Clifford, Unlocked is a jaw-dropping and authentic account of life in the toughest of workplaces.

David McDonald (Author)
David McDonald is a retired prison officer from Portlaoise. He has worked in some of the largest prisons in Ireland including Mountjoy and Portlaoise. He was Assistant Chief Officer in the Midlands prison. Unlocked is his first book. Michael 'Mick' Clifford is Special Correspondent for the Irish Examiner. He has been working in print and broadcast journalism for over twenty years. He is the author of three non-fiction books, including Bertie Ahern and the Drumcondra Mafia (with Shane Coleman), A Force for Justice: The Maurice McCabe Story, and two crime novels. In 2014, TV3's Tonight with Vincent Browne programme selected him as Journalist of the Year for his coverage of the garda whistle-blower story. He was named the newspaper industry's Journalist of the Year in 2016. He lives in Dublin.

NPB9781844886197
9781844886197
1844886190
Unlocked: An Irish Prison Officer's Story by David McDonald
David McDonald
New
Paperback
Penguin Books Ltd
2022-07-14
304
N/A
Book picture is for illustrative purposes only, actual binding, cover or edition may vary.
This is a new book - be the first to read this copy. With untouched pages and a perfect binding, your brand new copy is ready to be opened for the first time
Trustpilot