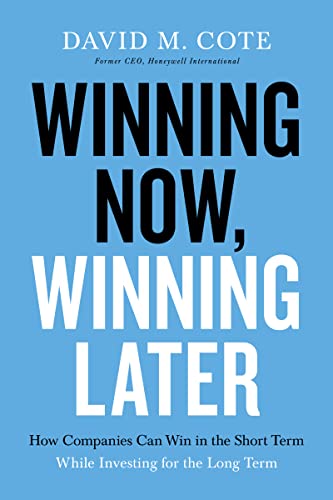 Business leaders often take actions that prop up earnings in the short term, but compromise their companies' long-term health. David Cote, the much-respected former leader of Honeywell International and one of the most successful CEOs of his generation, shares a simple, paradigm-shifting method of achieving both short- and long-term goals.

Winning Now, Winning Later: How Companies Can Succeed in the Short Term While Investing for the Long Term by David M. Cote

From local coffee shops to the largest Fortune 500 companies, everyone is struggling to make the impossible choice between chasing short-term objectives and creating a secure future for their company.

David Cote understood this dilemma and rejected it. And in these pages, he shows you how taking the same revolutionary approach might be the smartest business decision you'll ever make.

Upon taking his place as CEO of Honeywell International in 2002, he encountered an organization on the verge of failure thanks to years of short-termism.

Winning Now, Winning Later reveals the bold the operational reforms and counterintuitive leadership practices you can put into practice that will allow you to do two conflicting things at the same time-pursue strong short- and long-term results. This tested and proven approach can strengthen your business like never before, and even rescue it from the brink of disaster no matter how dire the current circumstances may seem.

Offering 10 essential principles for winning both today and tomorrow, this book will help you:

Presenting a comprehensive solution to a perennial problem, Winning Now, Winning Later is a go-to guide for you and leaders everywhere to finally transcend short-termism's daily grind and leave an enduring legacy of success.

The former Honeywell CEO's Winning Now, Winning Later is such a rich, unusual entry in the genre because instead of running through his favorite management maxims, Cote provides a gripping, on-the-scene account of how he deployed a series of bedrock principles to transform a flailing conglomerate. The lessons come to life because the reader witnesses Cote, over 16 years ending in 2018, relentlessly putting them into practice to meet the biggest challenge in corporate America: balancing the short-term success demanded by investors with sowing the seeds for rewards that will only be harvested years hence, but are essential to achieving greatness. -- Fortune Magazine
'David Cote turned a failing company into a global juggernaut by transforming the culture at Honeywell, and challenging his people to think and operate differently and, in his words, 'stay hungry.' David's story is both inspirational and highly instructive, and his perspective and the lessons he imparts in Winning Now, Winning Later are relevant not just in business, but in any scenario where one wants to enact meaningful change and achieve great success.' --Robert Iger, Former Chairman and CEO, The Walt Disney Company, #1 New York Times bestselling author
'David Cote is the most successful leader of a major industrial manufacturing company of his era. Of course, there have been some extraordinary high-tech successes with CEOs who are deservedly rock stars. But in the manufacturing area, David Cote stands alone.' --Henry M. Paulson Jr., Former US Secretary of the Treasury, New York Timesbestselling author
'I talk to more CEOs than anyone on Earth, and my advice to them is 'get this book,' because I am sick and tired of the griping and the grousing about how they aren't given enough time to work their magic. David Cote is living proof that you can perform both short and long term, and he's laid it all out for you to do it. Anyone running any business needs to satisfy more than themselves. Cote tells you how to do the job to everyone's satisfaction. Believe me, his task was a lot more difficult than yours will ever be unless your name is Hercules and you work at Augean Stables, Inc! '--Jim Cramer, host of CNBC's Mad Money,New York Times bestselling author
'As a CEO who managed for the long term with a keen eye to the short term, I found that I had to create my own playbook as I went along. How I wish David Cote's excellent book had been available to me then. Life would have been so much easier! Thanks, David. Many leaders will benefit from this 'how to.''--Indra K. Nooyi, Former Chairman, PepsiCo, Inc.
'David Cote delivers a masterclass in how to run a global Fortune 100 business for long-term success. Every business leader from every industry can learn from the hard-earned wisdom offered in this book.'--Marc Benioff, Co-chief Executive Officer and Founder, Salesforce, New York Times bestselling author
As Chairman and CEO of the industrial giant Honeywell over 16 years, David Cote grew the company's market capitalization from around $20 billion to nearly $120 billion, delivering returns of 800 percent and beating the S&P by nearly two and a half times. Currently, David is Executive Chairman of Vertiv Holdings Co, a global data center products and services provider. He is a member of the Aspen Economic Strategy Group and on the Boards of the Council on Foreign Relations and the Conference of Montreal.
CIN001024331
9781599510217
1599510219
Winning Now, Winning Later: How Companies Can Succeed in the Short Term While Investing for the Long Term by David M. Cote
David M. Cote
Used - Very Good
Hardback
HarperCollins Focus
20200806
288
N/A
Book picture is for illustrative purposes only, actual binding, cover or edition may vary.
This is a used book - there is no escaping the fact it has been read by someone else and it will show signs of wear and previous use. Overall we expect it to be in very good condition, but if you are not entirely satisfied please get in touch with us
Trustpilot