The Black Death and the Transformation of the West David Herlihy 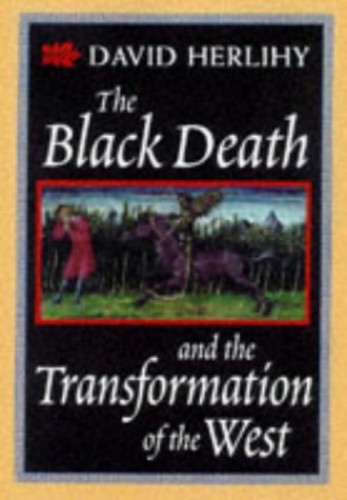 Looking beyond the view of the plague as unmitigated catastrophe, Herlihy finds evidence for its role in the advent of new population controls, the establishment of universities, the spread of Christianity, the dissemination of vernacular cultures, and even the rise of nationalism.

In this small book David Herlihy makes subtle and subversive inquiries that challenge historical thinking about the Black Death. Looking beyond the view of the plague as unmitigated catastrophe, Herlihy finds evidence for its role in the advent of new population controls, the establishment of universities, the spread of Christianity, the dissemination of vernacular cultures, and even the rise of nationalism. This book, which displays a distinguished scholar's masterly synthesis of diverse materials, reveals that the Black Death can be considered the cornerstone of the transformation of Europe.
Herlihy proposed that the Black Death led to "the transformation of the West" and shaped crucial aspects of modern thinking and behavior. Briefly and lucidly, Herlihy argued that Europe was...locked into Malthusian stasis, with a population unable to improve its standard of living and possessed of a set of unchanging and stagnating institutions. The Black Death was to shake Europe out of its immobile lethargy and to initiate processes of renewal...Samuel Cohn's succinct introduction provides an excellent commentary on Herlihy's theses. -- Andrew Wear * Times Literary Supplement *
Focusing on the Black Death which reduced the population in some European cities by 80 percent, Herlihy draws some powerful parallels between the plague and AIDS...His argument is a provocative one which will lead other historians to re-examine not only the period of the Black Death but the foundations of medieval and modern medicine. -- Lara Marks * History Today *
The essays offer a number of fresh perspectives on the Black Death, the series of plagues that ravaged Europe after 1347. * History *
[These] essays redefine the historical study of the Black Death...Herlihy's contention is that we can learn from this 'devastating natural disaster'; for example, parallels can be drawn to today's pandemic of AIDS, especially in the resultant bigotries that both engendered...This book, which opens a new chapter on the history and implications of the plague, is essential for all readers of medieval history. * Library Journal *
Herlihy died in 1991, leaving these 1985 lectures among his unpublished papers. In them, he raises questions about the impact of the black death on everyday society, agrarian practices, the use of inventions, travel, and medical theory and practice. Because of their provocative ideas and new ways of looking at older assumptions, they are highly worthy of publication. -- William Beatty * Booklist *
Bold, novel theories, sure to be controversial, about the medieval pandemic known as the Black Death...Herlihy revisits much of the conventional wisdom about the demographic, cultural, and even medical impact of the plague...A stimulating discussion of some rarely considered aspects of one of history's turning points. * Kirkus Reviews *
[A] fine addition to thinking on the [Black Death] and an example of how good historical thought evolves. * Publishers Weekly *
The articles in this collection surprisingly are as fresh today as when they were delivered. David Herlihy utilizes new approaches and new forms of evidence to raise intriguing suggestions concerning the economic, social, and cultural history of European civilization and the borderlines between medieval and modern Europe. Supplemented by Samuel K. Cohn's invaluable introduction, they will stimulate a wealth of new historical investigation. This work can be read with profit by undergraduates, graduate students, and professional historians. -- William M. Bowsky, University of California, Davis, author of A Medieval Italian Commune
Living in the age of AIDS, Ebola fever, and the prospect of new, lethal diseases, we can surely benefit from the historical perspective David Herlihy provides in this wonderful book on the plague of 1348. Herlihy raises important questions about the exact nature of the disease, and how the economy and society of medieval Europe responded to unprecedented catastrophe. How do people explain the origin and course of a new disease? How do people react when the established institutions of church, state, and science fail to offer acceptable explanations for the occurrence of extraordinary levels of mortality? Herlihy answers these questions and offers fresh insights on an old killer that have a timely meaning for the modern world. Cohn provides a wise, contextual introduction and has skillfully edited these essays, making available once more to old friends and new readers the distinctive style and thoughts of David Herlihy. -- Steven Epstein, University of Colorado at Boulder, author of Wage Labor and Guilds in Medieval Europe
The work of a mature, indeed brilliant, scholar. This is a succinct, lucid, provocative, and very learned treatment of the Black Death in its causes and consequences. -- Thomas Kuehn, author of Law, Family, and Women
David Herlihy (d. 1991) was Barnaby Conrad and Mary Critchfield Keeney Professor and Professor of History at Brown University. Samuel K. Cohn, Jr., is Professor of Medieval History at the University of Glasgow. Among his books are The Cult of Remembrance and the Black Death and Women in the Streets: Essays on Sex and Power in the Italian Renaissance.
Introduction Bubonic Plague: Historical Epidemiology and the Medical Problems The New Economic and Demographic System Modes of Thought and Feeling Notes Index
GOR001711644
9780674076136
0674076133
The Black Death and the Transformation of the West by David Herlihy
David Herlihy
Used - Very Good
Paperback
Harvard University Press
1997-09-28
128
N/A
Book picture is for illustrative purposes only, actual binding, cover or edition may vary.
This is a used book - there is no escaping the fact it has been read by someone else and it will show signs of wear and previous use. Overall we expect it to be in very good condition, but if you are not entirely satisfied please get in touch with us
Trustpilot