It's All True David Freeman 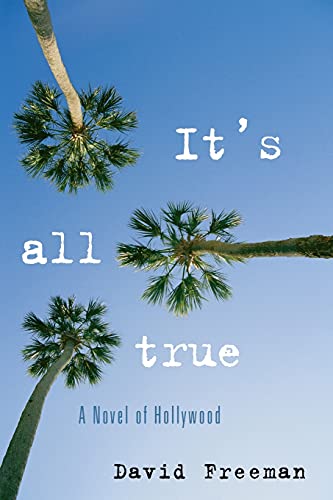 It's All True by David Freeman

It's All True: A Novel of Hollywood by David Freeman

Henry Wearie is a man with a brilliant future behind him.

He arrived in Hollywood barely twenty-one, having escaped from a confusing family and New York University. He got hot fast, selling a big-money script. He was on his way up -- though not quite as far up as he had expected. Henry stalled in the middle, then fell from there. As he puts it, "I've been hotter and colder than my oven."

It's All True maps Henry's odyssey through a tantalizing Los Angeles that he loves and resents, a place where he always feels one phone call, one script, or one break away from the brass ring that circles in and out of his grasp.

He marries and divorces and never quite stops yearning for his ex-wife. He spends his days trying to resurrect the life that he let slip away. Then his faltering career gets an unexpected jolt from an old girlfriend who has been promoted into the upper reaches of a studio. She helps Henry, though she extracts a surprising price.

His friends are a motley crew of wiseguy screenwriters, once-popular directors, obscure actors, and famous and highhanded producers and film stars identifiable to most everyone.

In creating Henry's saga, veteran novelist and screenwriter David Freeman has written an intimate history of Hollywood over the last twenty-five years, viewed from inside the soundstages, the bedrooms, the fashionable restaurants, and the studio meetings where fortunes can turn on a chance word.

This is a book studded with the delicious details of the folkways of the movie business and the romantic customs of its denizens. Enlivened by Freeman's corrosive wit, It's All True is hilarious and touching and, astonishingly, absolutely all true.
David Freeman is a recovering screenwriter and the author of two previous novels, two collections of short stories, and a memoir of his time writing a script for director Alfred Hitchcock. His play, Jesse and the Bandit Queen, was produced by the New York Shakespeare Festival at the Public Theater and has since been performed around the world. He has contributed frequently to The New York Times, the Los Angeles Times, The New Yorker, and The Wall Street Journal. He lives in Los Angeles.
Contents

9. Thank You for Everything