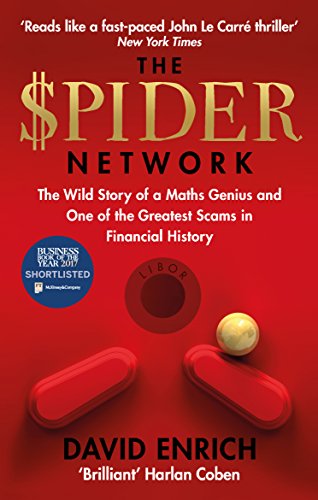 The Spider Network by David Enrich

The Spider Network: The Wild Story of a Maths Genius and One of the Greatest Scams in Financial History by David Enrich

Shortlisted for the Financial Times Business Book of the Year!


'Will snare you in its web of deceit ... A brilliant investigative expose' - Harlan Coben, bestselling thriller author


The Spider Network is the almost-unbelievable and darkly entertaining inside account of the Libor scandal - one of the biggest, farthest-reaching financial scams since the global financial crisis - written by the only journalist with access to Tom Hayes before he was sentenced to fourteen years in prison. Full of exclusive details, and with ramifications that stretch right across the British establishment, this is a gripping, real-life story of outlandish characters and reckless greed in the City of London.

By turns a rollicking account of the scandal and also a provocative examination of a financial system that was crooked throughout, The Spider Network is a perfect read for fans of The Wolf of Wall Street and The Big Short.

Anyone with an interest in financial services and in what has gone wrong will find The Spider Network compelling. -- Daniel Finkelstein * The Times *
a surprisingly human narrative ... truly memorable ... a vivid depiction of the ethos of the core financial institutions upon which the global economy depends * New York Times *
a model of investigative financial writing... a more satisfying read than THE BIG SHORT by Michael Lewis * Literary Review *
will snare you in its web of deceit, lies, corruption, manipulation and colourful characters. [a] brilliant investigative expose * Harlan Coben, bestselling thriller author *
supremely gripping ... a thrilling tour de force of reporting, revelation and reasoning ... unmissable * Iain Martin, bestselling author of MAKING IT HAPPEN: FRED GOODWIN, RBS AND THE MEN WHO BLEW UP THE BRITISH ECONOMY *
An incredibly entertaining, globe-straddling inside account of how one trader turbocharged a greedy cabal that scammed savers and borrowers everywhere. A must read if you want to understand how big banks and traders really work * Marcus Brauchli, former Executive Editor of the Washington Post and Managing Editor of the Wall Street Journal *
Equally entertaining and illuminating ... Enrich's brilliant depiction ... owes to deep reporting, deft writing, and a nuanced approach that characterizes the entire book... First-rate. * John Helyar, bestselling author of BARBARIANS AT THE GATE *
how did a socially awkward English math whiz mastermind manipulation of lending rates on a global scale? And was Tom Hayes truly the mastermind, or just a cog in a corrupt banking system? In David Enrich's gripping tale, the characters have nicknames worthy of the Mafia, and their ethical compasses aren't much better * Paul Ingrassia, Pulitzer Prize winner and bestselling author of CRASH COURSE *
gripping and disturbing ... It reads like a thriller and has some hilarious moments, whilst raising important questions about the nature of our financial and judicial systems * Ian Fraser, journalist and author of SHREDDED: INSIDE RBS, THE BANK THAT BROKE BRITAIN *
David Enrich is a masterful story teller ... Michael Lewis has a new rival * Sheila Bair, former chair of the FDIC and president of Washington College *
An absorbing read that provides both a meticulous dissection of an immense scandal as well as a fascinating human story * Bethany McLean, bestselling author of THE SMARTEST GUYS IN THE ROOM: THE AMAZING RISE AND SCANDALOUS FALL OF ENRON *
For years, David Enrich has chased down the inside story of one the biggest financial frauds in history and was even threatened with jail by a British court if he printed what he knew. Now, in his blockbuster book The Spider Network, all of the secrets come spilling out...With an unerring eye for detail, Enrich shows in this masterful work how a toxic stew of greed, arrogance and a lust for power led to a criminal scheme of unparalleled dimensions. It should be required reading for anyone who wants to understand the dirty underbelly of the financial world. * Kurt Eichenwald, Pulitzer Prize winning author of THE INFORMANT *
This dwarfs by orders of magnitude any financial scams in the history of markets. * Andrew Lo, Professor of Finance at MIT *
In the hands of journalist David Enrich, the true tale of former UBS and Citigroup trader Tom Hayes becomes a page-turning crime drama that engages - and educates - readers from beginning to end. * The Charlotte Observer *
A gripping narrative ... impressive reporting and writing chops are on full display ... reads like a fast-paced John le Carre thriller, and never lets up * New York Times book review *
a feat of reporting, and much of it reads like a novel -- Leigh Gallagher * Washington Post *
a remarkable read -- John Arlidge * Sunday Times *
jaw-dropping * Financial Times *
a gripping financial thriller * Daily Mail *
DAVID ENRICH is the Finance Editor at the New York Times. His coverage of the Libor scandal, based partly on years of secret access to Tom Hayes and his family, won the Gerald Loeb Award for feature writing in 2016.
GOR009005834
9780753557518
0753557517
The Spider Network: The Wild Story of a Maths Genius and One of the Greatest Scams in Financial History by David Enrich
David Enrich
Used - Very Good
Paperback
Ebury Publishing
2018-03-01
496
Long-listed for Financial Times and McKinsey Business Book of the Year 2017 (UK)
Book picture is for illustrative purposes only, actual binding, cover or edition may vary.
This is a used book - there is no escaping the fact it has been read by someone else and it will show signs of wear and previous use. Overall we expect it to be in very good condition, but if you are not entirely satisfied please get in touch with us
Trustpilot