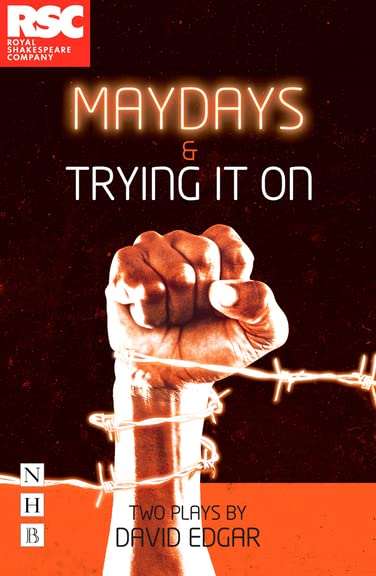 Maydays & Trying It On by David Edgar

Two plays from one of the UK's most acclaimed playwrights. This new version of David Edgar's 1983 award-winning hit play, Maydays, has startling parallels to the political revolution of the Millennial Generation. Trying It On, David Edgar's one-person show, also relates the events of 1968 to the turmoil of today.

Maydays & Trying It On by David Edgar

1968. A time of political upheaval the likes of which has not been seen since. Until - perhaps - now. In a new age of radical leftism and global politics, this new version of David Edgar's 1983 award-winning hit play, Maydays, has startling parallels to the political revolution of the Millennial Generation. It's 1968. David is 20. It is the height of the worldwide student revolt. The Vietnam war rages. Enoch Powell delivers his 'Rivers of Blood' speech. Martin Luther King is assassinated. These events will define David's politics and give focus to his writing. It's 50 years on. The 70-year-old is confronted by the 20-year old. Do they share the same beliefs? If not, is it the world that's changed, or him? Trying It On is a new play, written and perfromed by David Edgar. It premieres at the RSC in October 2018.

David Edgar is a leading UK playwright, author of many original plays and adaptations. He also pioneered the teaching of playwriting in the UK, founding the Playwriting Studies course at Birmingham University in 1989.

His work for television includes adaptations of Destiny, screened by the BBC in 1978, The Jail Diary of Albie Sachs, televised by the BBC in 1981, and The Life and Adventures of Nicholas Nickleby, televised by Channel 4 in 1982, as well as the plays Buying a Landslide(1992) and Vote for Them (1989). He is also the author of the radio plays Ecclesiastes(1977), A Movie Starring Me (1991), Talking to Mars (1996) and an adaptation of Eve Brook's novel The Secret Parts (2000). He wrote the screenplay for the film Lady Jane(1986).

He is the author of How Plays Work (Nick Hern Books, 2009) and The Second Time as Farce: Reflections on the Drama of Mean Times (1988), and editor of The State of Play: Playwrights on Playwriting (2000). He was Resident Playwright at the Birmingham Repertory Theatre in 1974-5 (Board Member from 1985), Fellow in Creative Writing at Leeds Polytechnic, Bicentennial Arts Fellow (US) (1978-9) and was Literary Consultant for the RSC (1984-8, Honorary Associate Artist, 1989). He founded the University of Birmingham's MA in Playwriting Studies in 1989 and was its director until 1999. He was appointed Professor of Playwriting Studies in 1995.

GOR010629454
9781848427327
1848427328
Maydays & Trying It On by David Edgar
David Edgar
Used - Very Good
Paperback
Nick Hern Books
2018-09-27
160
N/A
Book picture is for illustrative purposes only, actual binding, cover or edition may vary.
This is a used book - there is no escaping the fact it has been read by someone else and it will show signs of wear and previous use. Overall we expect it to be in very good condition, but if you are not entirely satisfied please get in touch with us
Trustpilot