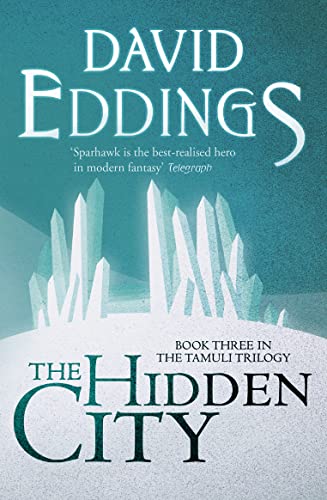 The Hidden City by David Eddings

The Hidden City (The Tamuli Trilogy, Book 3) by David Eddings

Queen Ehlana has been taken prisoner and held in the Hidden City as the time for battle approaches.

The face of the enemy has been unmasked as Cyrgon, the sinister god of the Cyrgai. Corrupted further by unspeakable magic, he threatens to destroy the world in his lust for power.

In exchange for their help in defeating Cyrgon and saving his beloved Ehlana, Sparhawk has offered freedom to the Troll-Gods trapped in their sacred jewel, the Blue Rose. However, this carries its own cost . . . But what price is too high when the fate of the world and everything you hold dear are threatened.

'Sparhawk is the best-realized hero in fantasy' Daily Telegraph

GOR007497590
9780007579020
0007579020
The Hidden City (The Tamuli Trilogy, Book 3) by David Eddings
David Eddings
The Tamuli Trilogy
Used - Very Good
Paperback
HarperCollins Publishers
2015-09-10
624
N/A
Book picture is for illustrative purposes only, actual binding, cover or edition may vary.
This is a used book - there is no escaping the fact it has been read by someone else and it will show signs of wear and previous use. Overall we expect it to be in very good condition, but if you are not entirely satisfied please get in touch with us
Trustpilot