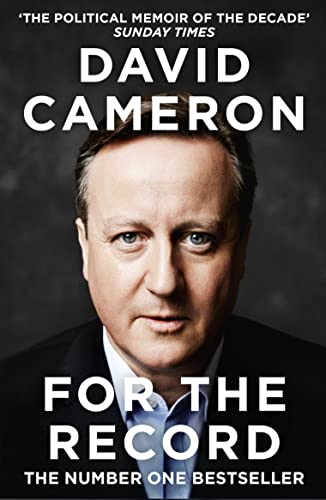 For the Record by David Cameron

For the Record by David Cameron

What was it like to lead the Conservative Party back to power and form a coalition government? How does a Prime Minister turn around an economy, handle a migration crisis and respond to a rapidly changing Europe? Why call a referendum on Britain's EU membership?

David Cameron answers these questions and more with a candour that extends beyond the events he faced to the people he encountered and, fascinatingly, to the things he got right and wrong.

He talks too about what has happened in the four years since that momentous vote in what is the frankest insight yet into the inner workings of politics and the mind of one man who was at the heart of it.

'I praise For the Record with genuine enthusiasm. It is tastily candid about his colleagues ... but also about his own mistakes' Andrew Billen, Times

'Arresting ... Cameron has always been an easy target. But on reading this book, I think it is impossible for any fair-minded observer to doubt that he was a fundamentally decent, well-intentioned man, who did his best to represent Britain on the world stage and left our nation's economy in a much better state than he found it.' Daily Mail

'A truly great political read ... As much a guide to our future as to our past ... Well written, well edited, pacey, the substance laced with anecdotes about life at the summit. Scores are settled too ... I've read a lot of political memoirs and this is one of the very best.' George Osborne, Evening Standard

'Well-written and lucid ... His account of that tragedy [the death of his eldest son] is heart-breaking.' Telegraph

'It rattles along nicely at a pace that belies its 752 pages.' New Statesman

'His book displays all the sensitivity and communication skills he showed in office, and there is plenty of evidence of regret ... Much livelier than I feared, full of colour, gossipy asides and decent anecdotes ... The heavier policy stuff is also compelling, and revealing of the mountainous demands placed on Prime Ministers.' i Newspaper

'By any reckoning, it's an important book ... There's a candour there that people will like.' Alastair Campbell, BBC Radio 4

'A much better book than a lot of people are predicting. He writes with authenticity.' Iain Dale, BBC Radio 4

David Cameron was elected Conservative leader in 2005 and in 2010 became Prime Minister after forming the UK's first coalition government for 70 years. Following five years of economic transformation and radical reform, he won the first Conservative majority in a quarter of a century. In 2016 he stood down after his referendum on Britain's membership of the European Union resulted in a vote to leave.

GOR010828499
9780008239329
0008239320
For the Record by David Cameron
David Cameron
Used - Very Good
Paperback
HarperCollins Publishers
2020-09-17
752
N/A
Book picture is for illustrative purposes only, actual binding, cover or edition may vary.
This is a used book - there is no escaping the fact it has been read by someone else and it will show signs of wear and previous use. Overall we expect it to be in very good condition, but if you are not entirely satisfied please get in touch with us
Trustpilot