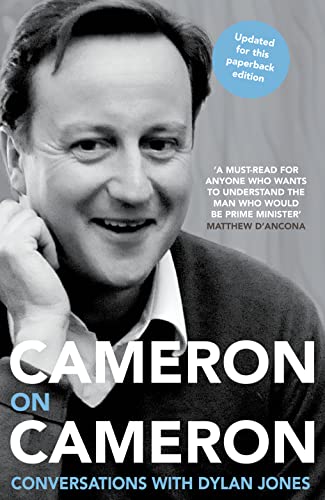 Cameron on Cameron by David Cameron

Just who does David Cameron think he is? In an engaging series of landmark interviews that will define the would-be prime minister ahead of the next election, Dylan Jones finds out.

Cameron on Cameron: Conversations with Dylan Jones by David Cameron

Just who does David Cameron think he is? In an engaging series of landmark interviews that will define the would-be prime minister ahead of the next election, Dylan Jones finds out.

David Cameron is asking you for the keys to Number 10 - but is he a smartly dressed smoothie with all the right lines, or a gifted politician who instinctively understands the country's priorities? A throwback to the age when privilege brought power, or a dynamic alternative to a Labour Party that has run out of ideas?

Award-winning journalist Dylan Jones set out to answer these questions in a series of wide-ranging and candid interviews that will define David Cameron ahead of the next election - and for years to come. A book about a politician for people who don't buy books about politicians, `Cameron on Cameron' will, for many, settle the question of whether David Cameron has got what it takes to lead the country.

What Cameron thinks may soon become what Britain does - and Jones teases out the details of Cameron's positions on the big issues. From the Iraq war to our friendship with America, from education to immigration, `Cameron on Cameron' will make for an unprecendented view into a politician's world and a document of practical use in our democracy. From the Conservative Party's bouts of vicious internal backstabbing to Cameron's marriage to Samantha and their family life - `Cameron on Cameron' lays bare the forces which shape the man who may succeed Gordon Brown before the decade is out.

`Dylan Jones has had the sort of access of which most political journalists can only dream, and brings to his subject formidable writing talent, wit and wisdom. This is an important book and a must-read for anyone who wants to understand the man who would be prime minister.' Matthew d'Ancona, editor of the Spectator

`Dylan Jones is truly a polymath, a man equally at home discussing the merits of Arne Jacobsen as the appeal of David Cameron. As a writer, he has an effortless style with an unerring instinct for the absurd and the noteworthy.' Simon Kelner, editor of the Independent

Dylan Jones is the editor of GQ magazine and a regular columnist for the Independent and the Mail on Sunday. He has won six British Society of Magazine Editors awards, and written and edited a variety of books, most notably a personal history of Apple, `iPod Therefore I Am', and the international bestselling biography, `Jim Morrison: Dark Star'. Formerly an editor at i-D, The Face, Arena, The Observer and The Sunday Times, he was also the Chairman of the BSME in 1995 and the Chairman of Fashion Rocks Monaco, for the Prince's Trust.

GOR002253858
9780007285372
000728537X
Cameron on Cameron: Conversations with Dylan Jones by David Cameron
David Cameron
Used - Very Good
Paperback
HarperCollins Publishers
2010-01-07
352
N/A
Book picture is for illustrative purposes only, actual binding, cover or edition may vary.
This is a used book - there is no escaping the fact it has been read by someone else and it will show signs of wear and previous use. Overall we expect it to be in very good condition, but if you are not entirely satisfied please get in touch with us
Trustpilot