The Art of Fairness David Bodanis 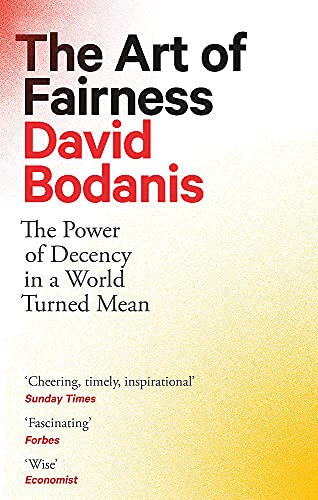 The Art of Fairness by David Bodanis

A thrilling study of the key elements of great - and fair - leadership, illuminated by real stories from history

The Art of Fairness: The Power of Decency in a World Turned Mean by David Bodanis

'David Bodanis is an enthralling storyteller. Prepare to be taken on a surprising, wide-ranging and ultimately inspiring journey to explore what makes us human' Tim HarfordCan you succeed without being a terrible person? We often think not: recognising that, as the old saying has it, 'nice guys finish last'. But does that mean you have to go to the other extreme, and be a bully or Machiavellian to get anything done?In THE ART OF FAIRNESS, David Bodanis uses thrilling historical case studies to show there's a better path, leading neatly in between. He reveals how it was fairness, applied with skill, that led the Empire State Building to be constructed in barely a year - and how the same techniques brought a quiet English debutante to become an acclaimed jungle guerrilla fighter. In ten vivid profiles - featuring pilots, presidents, and even the producer of Game of Thrones - we see that the path to greatness doesn't require crushing displays of power or tyrannical ego. Simple fair decency can prevail.With surprising insights from across history - including the downfall of the very man who popularised the phrase 'nice guys finish last' - THE ART OF FAIRNESS charts a refreshing and sustainable new approach to cultivating integrity and influence.
Bodanis' book is more than a business book, it is a primer for anyone fed up with the meanness of much of society, and looking for inspiration to do better - and fix things for others * Financial Times *
Bodanis is a superb storyteller ... [he] is clearly one of the good guys and this book is a cheering, timely, inspirational reminder, as we witness a new dawn in the American presidency, that they - we - can succeed, without losing our souls -- Christina Patterson * Sunday Times *
This is a delightful book about a vitally important subject - and David Bodanis is an enthralling storyteller. Prepare to be taken on a surprising, wide-ranging and ultimately inspiring journey to explore what makes us human - and how decency and kindness can prevail even in dark times. You won't be able to forget this book; and you won't want to -- Tim Harford
The core message can be found in the subtitle: 'The power of decency in a world turned mean' ... It is a wise lesson * Economist *
[Fairness] is one of those senses which drives our feelings much more than our thoughts ... I cannot think of a topic more in need of the kind of intelligent study which David Bodanis unfailingly provides -- Rory Sutherland
Fascinating -- Roger Trapp * Forbes *
David Bodanis studied mathematics and history at the University of Chicago, and for many years taught the 'Intellectual Toolkit' course at Oxford University. He is the author of many books including the New York Times bestseller E=mc2, which was adapted into the PBS documentary Einstein's Big Idea. He has been a popular speaker at the World Economic Forum in Davos and at many multinational companies including Google, Goldman Sachs, Unilever and Shell, where he worked at length with their standard-setting scenario team. Bodanis' work has been published in the Financial Times, Guardian and New York Times.
GOR012205404
9780349128191
0349128197
The Art of Fairness: The Power of Decency in a World Turned Mean by David Bodanis
David Bodanis
Used - Very Good
Paperback
Little, Brown Book Group
2021-11-04
336
N/A
Book picture is for illustrative purposes only, actual binding, cover or edition may vary.
This is a used book - there is no escaping the fact it has been read by someone else and it will show signs of wear and previous use. Overall we expect it to be in very good condition, but if you are not entirely satisfied please get in touch with us
Trustpilot