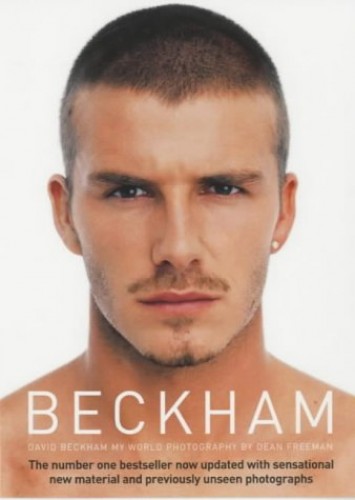 A stunning photographic portrait of the most talented and high-profile sportsman in the world today, accompanied by his own autobiographical text.

Manchester United footballer David Beckham has been voted one of European football's brightest stars. His marriage to Spice Girl Victoria Adams and the birth of their son, Brooklyn, crowned the couple's celebrity status. But while much is written about him, David Beckham remains an elusive character. Here, for the first time, he tells his own story and talks of the artistry of his football skills, his personal heroes and influences, his daily life in football and the celebrity world, and his hopes for the future. With exclusive and intimate photographs throughout by Dean Freeman, DAVID BECKHAM - MY WORLD will provide a unique insight in to this much talked about icon of our times.
Beautifully packaged book full of luxurious, pouting pictures and fond accounts of his family relationships and glam lifestyle. A genuine bestseller * Heat on MY WORLD *
Simply, but honestly written, the book is compelling...An intimate, illuminating insight of the person behind the public image...It's certainly a success story * Buzz Magazine on MY WORLD *
This is definately one for the real fans, both male and female...a very tasteful little number * Dartford Messanger on MY WORLD *

David Beckham began his playing career with Manchester United, where he won every major club honour including the Premiership and the UEFA Champions League.

In 2003 he joined Real Madrid, winning the Spanish league title in 2006, before signing for Los Angeles Galaxy and becoming the highest-profile player ever to appear in America's Major League Soccer.

He has played for England for over a decade, captaining his country 58 times, and has won numerous sporting accolades.

In 1999 he married Spice Girl Victoria Adams with whom he has three sons, Brooklyn, Romeo and Cruz.

GOR003164105
9780340792704
0340792701
David Beckham - My World by David Beckham
David Beckham
Used - Very Good
Paperback
Hodder & Stoughton
20010802
240
N/A
Book picture is for illustrative purposes only, actual binding, cover or edition may vary.
This is a used book - there is no escaping the fact it has been read by someone else and it will show signs of wear and previous use. Overall we expect it to be in very good condition, but if you are not entirely satisfied please get in touch with us
Trustpilot