Legends of the Age of Sigmar David Annandale 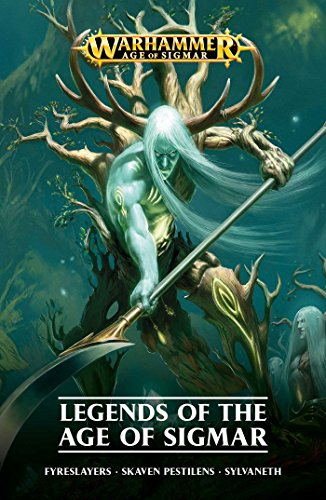 Legends of the Age of Sigmar by David Annandale

The Age of Sigmar has dawned, and across the Mortal Realms, the forces of Order and Chaos battle for supremacy.

Legends of the Age of Sigmar by David Annandale

The Age of Sigmar has dawned, and across the Mortal Realms, the forces of Order and Chaos battle for supremacy. It is not only the Stormhosts of Sigmar who fight for control of the Mortal Realms. Many other peoples, those pledged to Order and others to Chaos, wage war on behalf of gods and kings. From the grim duardin Fyreslayers of the mountain lodges to the enigmatic and otherworldly sylvaneth of Alarielle's court, and even the wretched skaven of diseased Clans Pestilens - all must play their part in the struggles to come, forging their own legends in the Age of Sigmar... This diverse omnibus contains stories by some of Black Library's most popular authors, including David Annandale, Guy Haley, David Guymer, Robbie MacNiven, Josh Reynolds, Rob Sanders and Gav Thorpe.
David Guymer's work for Warhammer Age of Sigmar includes the novels Hamilcar: Champion of the Gods and The Court of the Blind King, the audio dramas The Beasts of Cartha, Fist of Mork, Fist of Gork, Great Red and Only the Faithful. He is also the author of the Gotrek & Felix novels Slayer, Kinslayer and City of the Damned and the Gotrek audio dramas Realmslayer and Realmslayer: Blood of the Old World. For The Horus Heresy he has written the novella Dreadwing, the Primarchs novel Ferrus Manus: Gorgon of Medusa, and for Warhammer 40,000 The Eye of Medusa, The Voice of Mars and the two Beast Arises novels Echoes of the Long War and The Last Son of Dorn. He is a freelance writer and occasional scientist based in the East Riding, and was a finalist in the 2014 David Gemmell Awards for his novel Headtaker.

Robbie MacNiven is a Highlands-born History graduate from the University of Edinburgh. He has written the Warhammer Age of Sigmar novel Scourge of Fate and Gotrek Gurnisson novella The Bone Desert, as well as the Warhammer 40,000 novels Blood of Iax, The Last Hunt, Carcharodons: Red Tithe, Carcharodons: Outer Dark and Legacy of Russ. His short stories include 'Redblade', 'A Song for the Lost' and 'Blood and Iron'. His hobbies include re-enacting, football and obsessing over Warhammer 40,000.

Rob Sanders is the author of the Horus Heresy novellas Cybernetica and The Serpent Beneath, the latter of which appeared in the New York Times bestselling anthology The Primarchs. His other Black Library credits include the The Beast Arises novels Predator, Prey and Shadow of Ullanor, the Warhammer 40,000 titles Sons of the Hydra, Skitarius, Tech-Priest, Legion of the Damned, Atlas Infernal and Redemption Corps and the audio drama The Path Forsaken. He has also written the Warhammer Archaon duology, Everchosen and Lord of Chaos, along with many short stories for the Horus Heresy and Warhammer 40,000. He lives in the city of Lincoln, UK.
CIN001245059
9781784964474
1784964476
Legends of the Age of Sigmar by David Annandale
David Annandale
Warhammer: Age of Sigmar
Used - Very Good
Paperback
Games Workshop Ltd
20170126
624
N/A
Book picture is for illustrative purposes only, actual binding, cover or edition may vary.
This is a used book - there is no escaping the fact it has been read by someone else and it will show signs of wear and previous use. Overall we expect it to be in very good condition, but if you are not entirely satisfied please get in touch with us
Trustpilot