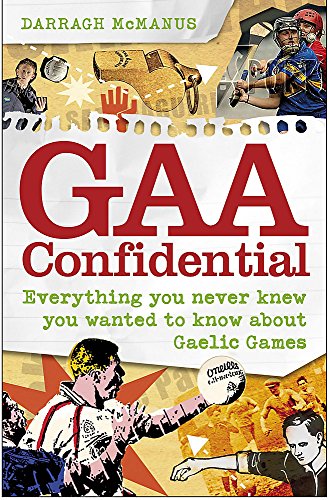 If GAA is the heartbeat of Ireland - GAA Confidential is taking its pulse.

'If I had to choose between Ireland winning the World Cup and my county winning a provincial title, I'd choose the latter any time'

So begins Darragh McManus's accessible, witty, original and observant look at the GAA. We've had books written by pundits and experts, from players, managers and commentators. Now, for possibly the first time, we have a Gaelic games book written by a card-carrying, grass-roots fan of anything and everything GAA.

In this humorous, deprecating, Nick Hornby-esque account, McManus takes a look at the GAA; the history, the haircuts, the personalities and the defining moments, from Offaly's Seamus Darby who buried the ball in the Kerry net in the last 60 seconds of the 1982 All-Ireland, to the abolition of Rule 42. He looks at how it's structured and organized, and what makes the Gaelic Athletic Association one of the most successful and vibrant sports bodies in the world. In short, snappy, easily digestible sections, McManus waxes lyrical on how socially, culturally, historically, even philosophically, the GAA is the soul of the Irish nation; and how Gaelic games have yet to take their rightful place on the silver screen - We must look forward to that glorious moment when an Irish director, on scooping the Academy Award for Best Film, leaps on stage, hits Billy Crystal a clatter, grabs the mike and roars, 'A chairde gael! Ta an athas orm an Oscar seo a glacadh ar son an scannan - Caman Everybody: the Secret Hurling Life of Buddy Holly'

This quirky, intelligent labour of love will be bought by GAA fans and players... but will be read by everyone.

'Perhaps the funniest, ,ost cultured book ever written about our national sports' * Irish Independent *
'Brilliantly illustrated, witty and genuinely fascinating ... GAA Confidential is an essential addition to the coffee table and as must as the summer rolls in' * Evening Herald *
'Flip, smart, ironic and breezy ... by turns a miscellany, polemic, social history and work of satire. The sort of sports book one could imagine being read by almost anyone' * Sunday Business Post *
'Casts a wry and amusing eye over every aspect of GAA ... entertaining and diverting fare' * Sunday Tribune *
'GAA Confidential is sure to be a massive hit ... the ultimate alternative guide' * Sunday World *
'A quirky, often hilarious labour of love' * Belfast Telegraph *
'A great read for the train journey' * Cavan Echo *
'Stirring stuff' * Clare People *
Darragh McManus graduated from University College Cork with a BA in English and History. He writes for and is a sub-editor of the Irish Independent and also writes for the Evening Herald. He now lives in Crusheen, Co Clare with his wife Majella.
GOR001614555
9780340938089
0340938080
GAA Confidential by Darragh Mcmanus
Darragh Mcmanus
Used - Very Good
Paperback
Hachette Books Ireland
2007-04-05
256
N/A
Book picture is for illustrative purposes only, actual binding, cover or edition may vary.
This is a used book - there is no escaping the fact it has been read by someone else and it will show signs of wear and previous use. Overall we expect it to be in very good condition, but if you are not entirely satisfied please get in touch with us
Trustpilot