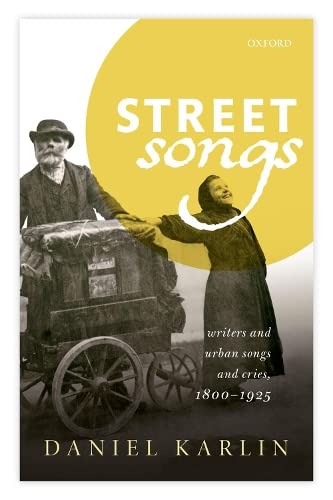 Explores the use made by poets and novelists of street songs and cries with a particular focus on nineteenth and early twentieth century writers including William Wordsworth, Elizabeth Barrett Browning, Robert Browning, Walt Whitman, George Gissing, James Joyce, Virginia Woolf, and Marcel Proust.

This book, based on the Clarendon Lectures for 2016, is about the use made by poets and novelists of street songs and cries. Karlin begins with the London street-vendor's cry of 'Cherry-ripe!', as it occurs in poems from the sixteenth to the twentieth century: the 'Cries of London' (and Paris) exemplify the fascination of this urban art to writers of every period. Focusing on nineteenth and early twentieth century writers, the book traces the theme in works by William Wordsworth, Elizabeth Barrett Browning, Robert Browning, Walt Whitman, George Gissing, James Joyce, Virginia Woolf, and Marcel Proust. As well as street-cries, these writers incorporate ballads, folk songs, religious and political songs, and songs of their own invention into crucial scenes, and the singers themselves range from a one-legged beggar in Dublin to a famous painter in fifteenth-century Florence. The book concludes with the beautiful and unlikely 'song' of a knife-grinder's wheel. Throughout the book Karlin emphasizes the rich complexity of his subject. The street singer may be figured as an urban Orpheus, enchanting the crowd and possessed of magical powers of healing and redemption; but the barbaric din of the modern city is never far away, and the poet who identifies with Orpheus may also dread his fate. And the fugitive, transient nature of song offers writers a challenge to their more structured art. Overheard in fragments, teasing, ungraspable, the street song may be 'captured' by a literary work but is never, finally, tamed.
...inspired interpretation grounded in extensive research. * Elizabeth Helsinger, Modern Language Review *
Deeply researched, but wearing its erudition lightly, this is a wonderful read. * Pamela K. Gilbert, Studies in English Literature 1500-1900 *
Daniel Karlin is Winterstoke Professor of English Literature at the University of Bristol. He has previously held appointments at the University of Sheffield, at Boston University, and at University College London. His research spans poetry and fiction of the long nineteenth century; he has particular interests in the poetry of Robert Browning, in the writings of Walt Whitman, Henry James, Rudyard Kipling, and Marcel Proust, and in the relations between poetry and song. His most recent book is The Figure of the Singer (Oxford University Press, 2013).
Preface 1: Orpheus in the City 2: The Child in the Street 3: Lippi Sings the Blues 4: The One-Legged Sailor and Other Heroes 5: The Voice of an Ancient Spring 6: Voulez ouyr les cris de Paris? 7: The Poet and the Knife-Grinder
NPB9780198792352
9780198792352
0198792352
Street Songs: Writers and urban songs and cries, 1800-1925 by Daniel Karlin (Winterstoke Professor of English Literature, University of Bristol)
Daniel Karlin (Winterstoke Professor of English Literature, University of Bristol)
Clarendon Lectures in English
New
Hardback
Oxford University Press
2018-11-29
208
N/A
Book picture is for illustrative purposes only, actual binding, cover or edition may vary.
This is a new book - be the first to read this copy. With untouched pages and a perfect binding, your brand new copy is ready to be opened for the first time
Trustpilot