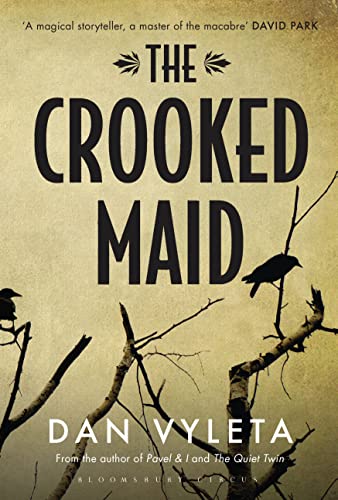 The Crooked Maid by Dan Vyleta

Graham Greene meets Dostoevsky in a thrilling and atmospheric story of guilt and restitution, set in post-war Vienna. From the author of Pavel & I and The Quiet Twin

The Crooked Maid by Dan Vyleta

Vienna, 1948. The war is over, and as the initial phase of de-Nazification winds down, the citizens of Vienna struggle to rebuild their lives amidst the rubble. Anna Beer returns to the city she fled nine years earlier after discovering her husband's infidelity. She has come back to find him and, perhaps, to forgive him. Traveling on the same train from Switzerland is 18-year-old Robert Seidel, a schoolboy summoned home to his stepfather's sickbed and the secrets of his family's past. As Anna and Robert navigate an unrecognizable city, they cross paths with a war-widowed American journalist, a hunchbacked young servant girl, and a former POW whose primary purpose is to survive by any means and to forget. Meanwhile, in the shells of burned-out houses and beneath the bombed-out ruins, a ghost of a man, his head wrapped in a red scarf, battles demons from his past and hides from a future that is deeply uncertain for all. In The Crooked Maid, Dan Vyleta returns to the shadows of war-darkened Vienna, proving himself once again 'a magical storyteller, master of the macabre' (David Park).
Vyleta writes with the sharp, brutal clarity of cinematic freeze frames ... Noir meets Gothic - a thrilling tale of war crimes, family secrets, murder and blackmail * Independent *
The atmosphere of postwar Europe, still seething with animosity, is wonderfully evoked and the tangled plot is thrilling * The Times *
This is not your typical thriller ... it is not the twists and turns of the plot that will keep readers turning the pages. It is the atmosphere Vyleta builds up, line by line, of a world of secrets threatening to fall down on the characters' heads at any moment * Irish Examiner *
A literary thriller that is so dripping in atmosphere you half expect Orson Welles to come creeping out of the shadows ... A dark tale of intrigue, interconnected mysteries, hunger, guilt, patricide and revenge. Packed with literary and cinematic references, with a complex plot and a cast of credible characters, this is a seriously good novel from a seriously fine writer * Novel of the Week, Mail on Sunday *
The writing is often stunning. Vyleta's similes are memorable ... Vivid details litter the pages ... The imagery is cinematic, reminiscent of film noir, with exaggerated shadows, and light and shade dancing on walls and wan faces ... This is a compelling novel with all the verve and atmosphere of an Alfred Hitchcock film * Leyla Sanai, Independent on Sunday *
Impressive ... This is not just the past: it is the past as seen fractured and magnified through a lens. It is a place of unremitting strangeness, as real and as true to its own logic as those of Kazuo Ishiguro's Never Let Me Go or Tom McCarthy's Remainder ... It has the darkness and seductive excitement of a Metropolis, or a Cabinet of Dr Caligari. You enter it sideways, and your head spins * Esi Edugyan, Guardian *
A literary novel that reads like a spy thriller * Metro *
Dan Vyleta is the son of Czech refugees who emigrated to Germany in the late 1960s. He holds a PhD in History from the University of Cambridge. His first novel, Pavel & I, was published to international acclaim. His second novel, The Quiet Twin, was shortlisted for the Rogers Writers' Trust Fiction Prize. A Canadian by adoption, Dan Vyleta teaches Creative Writing at Durham University. www.danvyleta.com
GOR005376663
9781408827833
1408827832
The Crooked Maid by Dan Vyleta
Dan Vyleta
Used - Very Good
Paperback
Bloomsbury Publishing PLC
2014-01-16
448
N/A
Book picture is for illustrative purposes only, actual binding, cover or edition may vary.
This is a used book - there is no escaping the fact it has been read by someone else and it will show signs of wear and previous use. Overall we expect it to be in very good condition, but if you are not entirely satisfied please get in touch with us
Trustpilot