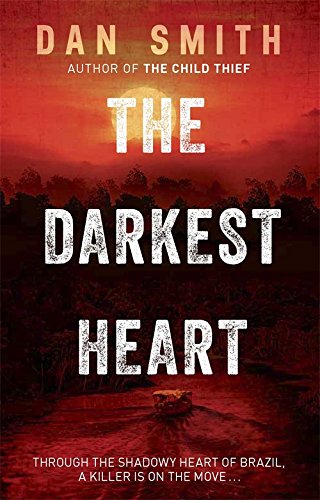 The Darkest Heart by Dan Smith

The new thriller from the highly acclaimed author of RED WINTER and THE CHILD THIEF.

The Darkest Heart by Dan Smith

'There were times I felt I would always be death's passenger. It moved one step ahead of me wherever I went, letting its shadow fall across me. It carried me on; shaded me from the world other people lived in.'

Leaving behind his life of violence in Brazil's darkest shadows, Zico is determined to become a better man. But it seems his old life isn't quite done with him yet when he's tasked with making one last kill. It's one that could get him everything he has ever wanted; a house, some land, cash in his pocket, a future for him and his girlfriend, Daniella. But this one isn't like all the others. This one comes at a much higher price.

THE DARKEST HEART is a journey through the shadowy heart of Brazil and the even darker mind of a killer, where fear is a death sentence and the only chance of survival might mean abandoning the only good thing you've ever known.

[A] gripping thriller with real depth of character - SUNDAY TIMES on Red WinterA superbly shivery atmosphere - THE TIMES on Red WinterOnce again Dan Smith has produced a first class historical thriller that will satisfy the most demanding of crime fans, while exploring the consequences of unchecked military might and the persistence of the human spirit. Smith's prose is crisp, his sense of pace flawless and his appreciation of the mundane terrors of warfare nothing short of masterly - CRIMEFICTIONLOVER (blog) on Red WinterShowing the same skills that he exercised in his previous novel, Smith has fashioned a story of page-turning intensity that simultaneously possesses real depth of characterisation - SUNDAY TIMES on Red WinterIt's amazing. Try it today - I can't recommend it enough! - WATERSTONES BOOKSHOP REVIEWS on The Child ThiefA better class of thriller - INDEPENDENT ON SUNDAY on Dark HorizonsAtmospheric ... This vivid thriller has echoes of Conrad's HEART OF DARKNESS - BIG ISSUE CYMRU on Dry Season

Dan Smith grew up following his parents across the world. He has been writing short stories for as long as he can remember and has been published in the anthology MATTER 4, shortlisted for the Royal Literary Fund mentor scheme, the NORTHERN WRITERS AWARD, the 2010 BRIT WRITERS PUBLISHED AUTHOR OF THE YEAR AWARD and the BEST FIRST NOVEL AWARD. He lives in Newcastle with his family.

GOR012316985
9781409137450
1409137457
The Darkest Heart by Dan Smith
Dan Smith
Used - Like New
Paperback
Orion Publishing Co
2015-07-30
416
N/A
Book picture is for illustrative purposes only, actual binding, cover or edition may vary.
The book has been read, but looks new. The book cover has no visible wear, and the dust jacket is included if applicable. No missing or damaged pages, no tears, possible very minimal creasing, no underlining or highlighting of text, and no writing in the margins
Trustpilot