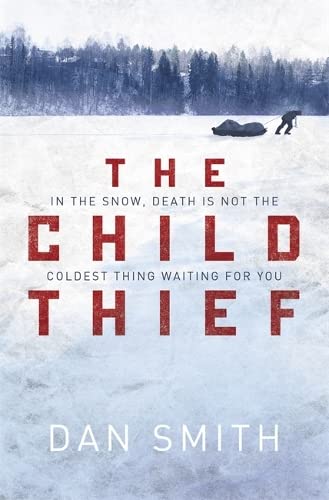 The Child Thief by Dan Smith

In the snow, death is not the coldest thing waiting for you...

The Child Thief by Dan Smith

December 1930, Western Ukraine. Luka is a veteran of the First World War and the Russian Civil War. All he wants now is a quiet life with his wife, twin sons and young daughter. Their small village has, so far, managed to remain hidden from the advancing Soviet brutality and labour camp deportations.

But everything changes the day the stranger arrives, pulling a sled bearing the bodies of two children. In a fervour, the villagers lynch the stranger, despite Luka's protests. But when calm is restored, the mob leader, Dimitri, discovers his daughter has vanished. Luka is the only man with the skills to find who could have stolen a child in these frozen white wastelands - and besides, the missing girl is best friends with Luka's daughter Lara, and he promises her that he will find her friend and bring her home.

Together with his sons and Dimitri, Luka sets out in pursuit across lands ravaged by war and gripped by treachery. Soon they realise that the man they are tracking is a no ordinary criminal, but a skilful hunter with the kidnapped child as the bait in his violent game.

It will take all of Luka's strength to battle the harshest of conditions, and all of his wit to stay a step ahead of Soviet authorities. And though his toughest enemy is the man he tracks, his strongest bond is a whispered promise to his family back at home.

Smith succeeds in creating a narrative that is both an engrossing thriller and the story of a man struggling in the grip of historical events that he only partially understands. -- Nick Rennison * THE SUNDAY TIMES *
This is a pursuit thriller of the highest quality, reminiscent of the classic of the genre, Geoffrey Household's Rogue Male. -- Myles McWeeney * IRISH INDEPENDENT *
A terrific book with an original setting ... [it] works both as a compelling thriller, in which readers are drawn into Luka's confrontation with the mysterious child thief, and as the story of one man entangled in historical events larger than his personal battle against a psychopathic murderer * BBC HISTORY MAGAZINE *
Smith is a talented writer who incorporates the forbidding landscape of Ukraine as a central character in the cat-and-mouse chase ... the well-constructed plot is nicely complemented by Smith's adept turn of phrase * SUNDAY BUSINESS POST *
Dan Smith does not rely on cliche and schmaltz to add depth to his storytelling - he relies on skills of which an author can be proud: good writing, proper characterisation and an imperfect main character who you nevertheless find yourself willing to prevail * LIFESTYLE MAGAZINE (NORTH EAST) *
It's amazing. Try it today - I can't recommend it enough! * WATERSTONES BOOKSHOP REVIEWS *
[A] taut, smart thriller... The Child Thief offers up a tense pace and nervous twists, but it's emotionally satisfying. Beyond its obvious thriller qualities, it's a story about fathers and sons, about the aftereffects of war, and about a ruthless and unforgiving slice of history. Highly recommended. * HISTORICAL NOVELIST SOCIETY *
Dan Smith grew up following his parents across the world. He has been writing short stories for as long as he can remember and has been published in the anthology MATTER 4, shortlisted for the Royal Literary Fund mentor scheme, the NORTHERN WRITERS AWARD, the 2010 BRIT WRITERS PUBLISHED AUTHOR OF THE YEAR AWARD and the BEST FIRST NOVEL AWARD. He lives in Newcastle with his family.
GOR004101621
9781409142621
1409142620
The Child Thief by Dan Smith
Dan Smith
Used - Very Good
Paperback
Orion Publishing Co
2012-05-10
368
N/A
Book picture is for illustrative purposes only, actual binding, cover or edition may vary.
This is a used book - there is no escaping the fact it has been read by someone else and it will show signs of wear and previous use. Overall we expect it to be in very good condition, but if you are not entirely satisfied please get in touch with us
Trustpilot