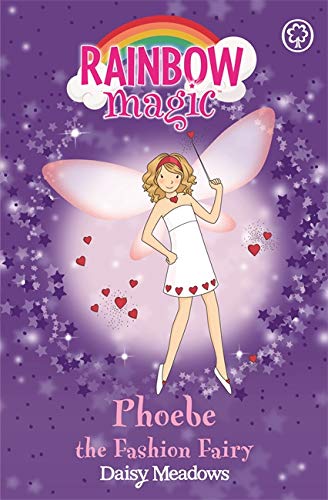 Join Rachel and Kirsty for lots of magical adventures with the seven Party Fairies!

Get ready for an exciting fairy adventure with the no. 1 bestselling series for girls aged 5 and up.

It's Queen Titania's and King Oberon's 1000th jubilee, and the seven Party Fairies are in charge of making the celebratory party extra-special! However, naughty Jack Frost has stolen each of the seven Party Fairies' magical party bags... if he succeeds the Fairyland celebrations will be ruined! Can Kirsty and Rachel help rescue the party bags so the magnificent jubilee cake can be finished in time...?

'These stories are magic; they turn children into readers!' ReadingZone.com

If you like Rainbow Magic, check out Daisy Meadows' other series: Magic Animal Friends and Unicorn Magic!

Daisy Meadows (Author)
The Rainbow Magic and Magic Animal Friends books are written by a small collective of authors under the name Daisy Meadows. Rainbow Magic is the no.1 bestselling series for girls aged 5 and up with over 30 million copies sold worldwide!

Learn more about the books at www.rainbowmagicbooks.co.uk (where you can download the Rainbow Magic Reading Challenge poster) and www.magicanimalfriends.com (where you'll find fun animal activity sheets)

Georgie Ripper (Illustrator)
Georgie Ripper was born in London and is a children's book illustrator known for her work on the Rainbow Magic series of fairy books. She won the Macmillan Prize for Picture Book Illustration in 2000 with My Best Friend Bob and Little Brown Bushrat which she authored and illustrated.

GOR000420841
9781843628231
1843628236
Rainbow Magic: Phoebe The Fashion Fairy: The Party Fairies Book 6 by Daisy Meadows
Daisy Meadows
Rainbow Magic
Used - Very Good
Paperback
Hachette Children's Group
2005-04-07
80
N/A
Book picture is for illustrative purposes only, actual binding, cover or edition may vary.
This is a used book - there is no escaping the fact it has been read by someone else and it will show signs of wear and previous use. Overall we expect it to be in very good condition, but if you are not entirely satisfied please get in touch with us
Trustpilot