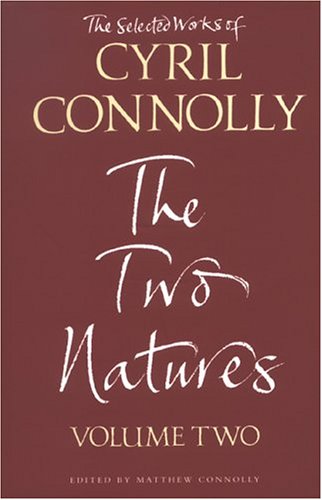 `The more books we read, the clearer it becomes that the true function of a writer is to produce a masterpiece and that no other task is of any consequence'

Cyril Connolly, the celebrated essayist and critic, lived a turbulent creative and personal existence at the heart of the English literary and artistic world until his death in 1974. The Two Natures is the second and final volume of his Selected Works, edited by his son Matthew Connolly. It opens with `An Edwardian Boyhood', from his early masterpiece, Enemies of Promise - a frequently charming, occasionally horrifying and unflinchingly honest account of his youth and formative influences.

The centrepiece of this volume is The Unquiet Grave, Connolly's most famous work, originally published under the pseudonym Palinurus. Written during the Second World War, this unique and inspiring book is a dreamlike and passionate but also sombre meditation on the pinnacles of European culture from ancient times to the present, now threatened again by barbarian darkness.

Leavening this collection are numerous sparkling examples of Cyril Connolly's travel essays, memoirs and satirical short stories. And The Two Natures concludes with his paean to poetry, which he believed to be `the supreme form of communication' and which was perhaps - his tumultuous romantic life and three marriages notwithstanding - the greatest love of his life.

`I was bowled over by The Unquiet Grave - stirring memories, reviving longings - when it came out in 1944 . . . The book is not an anthology: it is a composition, not easy to follow like a symphony first heard, although bedazzling at once by exquisite passages, disquieting thoughts, elegiac cries of pain, conjurations of pleasures lost . . . I read, and re-read, also for the quality of his prose: formed by a classical education, set free by his own voice - now lyrical, now taut; now private, now magisterial; no one in our language has written so sensuously of the beauty of fruit and plants, of animals, of the natural world. And there are his litanies, incantations that twist the heart - shapes of waterfronts, streets of Paris . . . ' Sybille Bedford in the Daily Telegraph, choosing The Unquiet Grace as her Book of the Century

`It is a book which, no matter how many readers it will ever have, will never have enough' Ernest Hemingway on The Unquiet Grave

`He's a writer for all seasons, for all readers . . . Whether he is talking about a meal of a rough red wine and steak frites, or wandering through Lisbon or Rome looking at architecture, one feels through his words the physical relish he takes in the experience. He makes you want to do the same things and derive the same intense enjoyment as he does' William Boyd

`For an expert in low spirits, Connolly seems to have had a high old time' Anthony Lane, New Yorker

Cyril Connolly was born in Coventry in 1903 and educated at Eton and at Balliol College, Oxford. He began reviewing for the New Statesman in 1927 and continued to write there, intermittently, over the next twenty years. He also wrote for the Architectural Review (1932-34) and the Daily Telegraph (1935-36), among other publications. His first book, and only completed novel, The Rock Pool , was published in 1935. In 1939, with Peter Watson and Stephen Spender, he founded the literary magazine Horizon, which he edited until closing it in 1950. From 1942 to 1943 he was also the literary editor of the Observer. In 1951 he joined the staff of the Sunday Times and was a lead book reviewer there until his death in 1974.Cyril Connolly was appointed a Chevalier of the Legion of Honour in 1947, a CBE and Companion of Literature in 1972, and an Honorary Member of the American Academy and National Institute of Arts and Letters in 1974.
GOR002180468
9780330486002
0330486004
The Selected Works of Cyril Connolly Volume Two: The Two Natures by Cyril Connolly
Cyril Connolly
Used - Very Good
Hardback
Pan Macmillan
20021108
380
null null null null null null null null null null
Book picture is for illustrative purposes only, actual binding, cover or edition may vary.
This is a used book - there is no escaping the fact it has been read by someone else and it will show signs of wear and previous use. Overall we expect it to be in very good condition, but if you are not entirely satisfied please get in touch with us
Trustpilot