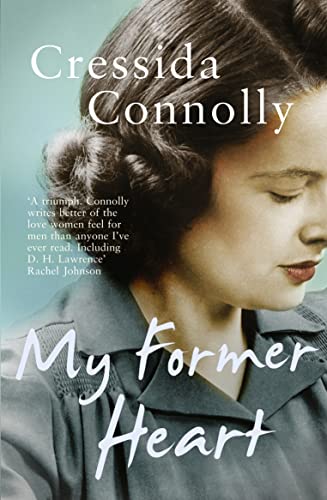 'Unusual and brilliant ... It has similarities to Alan Hollinghurst's The Stranger's Child.' Deborah Orr, Guardian

A beautifully written novel, which tells a story of love and loss through three generations of a family.

'Unusual and brilliant ... It has similarities to Alan Hollinghurst's The Stranger's Child.' Deborah Orr, Guardian

A beautifully written novel, which tells a story of love and loss through three generations of a family.

When she grew up, Ruth would say that she could place the day that her mother had decided to go away. She didn't know the actual date, but she recalled the occasion: it was on the afternoon of a wet day, early in 1942, during a visit to the cinema. She thought she could even pinpoint the exact moment at which Iris had made up her mind to go, leaving her only child behind. Neither of them could have guessed then that they would never live together again.

Spanning the second half of the last century, "My Former Heart", Cressida Connolly's mesmerising first novel, charts the lives of three generations of Iris's family, the mother who walked away from her child. Ruth will be deserted again, many years later, by a husband she loves, but not before she has had two children by him. She leaves London to live with her uncle, where she creates a new life for herself with another woman. And we follow the lives of her two children, trying to make a place for themselves in the world in the shadow of the family that precedes them.

With its large cast of fascinating characters, this is an outstanding novel about families and their ability to adapt. It surely marks the beginning of long career as a novelist for Cressida Connolly.

`A writer who seems able to peer directly into the human heart, to understand its follies and strivings, and to write about them with such sparkling originality that it makes you see the world afresh ... I strongly suggest Spectator readers buy two copies - one to savour, and one to throw at the Man Booker judges who unaccountably left it off this year's longlist.' John Preston, Spectator

`"Good" doesn't begin to do justice to the beautiful work of art she has produced...There is a deep satisfaction to the novel, a sense of cool, calm rightness flowing through the world' Elena Seymenliska, Daily Telegraph

`A deceptively quiet novel, it projects the resonant inner lives of its characters without the aid of plot histrionics or high drama. Yet it packs a huge emotional punch, dramatising grief and stoicism in an utterly convincing manner' Elizabeth Buchan, Sunday Times

`Cressida Connolly's atmospheric first novel. [She was] applauded for her economy of prose in her earlier collection of short stories, The Happiest Days. Similarly in My Former Heart, she can evoke the sensibility of childhood in half a sentence' Evening Standard

Cressida Connolly was born in 1960. She is a journalist and reviewer. She lives in Worcestershire with her husband and three children.

GOR003914126
9780007356355
0007356358
My Former Heart by Cressida Connolly
Cressida Connolly
Used - Very Good
Paperback
HarperCollins Publishers
2012-03-01
240
N/A
Book picture is for illustrative purposes only, actual binding, cover or edition may vary.
This is a used book - there is no escaping the fact it has been read by someone else and it will show signs of wear and previous use. Overall we expect it to be in very good condition, but if you are not entirely satisfied please get in touch with us
Trustpilot