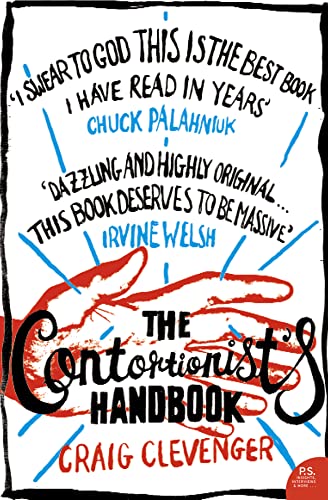 The Contortionist's Handbook by Craig Clevenger

A stunning novel about a brilliant young forger who continually reinvents himself to escape the authorities, described by Chuck Palahniuk, bestselling author of FIGHT CLUB, as 'the best book I have read in easily five years. Easily. Maybe ten years.'

The Contortionist's Handbook by Craig Clevenger

A stunning novel about a brilliant young forger who continually reinvents himself to escape the authorities, described by Chuck Palahniuk, bestselling author of FIGHT CLUB, as 'the best book I have read in easily five years. Easily. Maybe ten years.'

Following a near fatal overdose of painkillers, Daniel Fletcher is resuscitated in a Los Angeles emergency room and detained for psychiatric evaluation. Through a series of questions and tests, the psychiatrist must ascertain whether the patient intended to kill himself, or whether he can walk free. What the psychiatrist doesn't know is that 'Daniel Fletcher' is actually John - Johnny - Dolan Vincent, a brilliant young forger who continually changes his identity to save himself from a lifetime of incarceration. Johnny has done such assessments before - many, many times.

As he creates an elaborate bluff for the evaluator, Johnny reveals the true story of his traumatic past - a broken family, descent into the sinister world of forgers and criminals, and his one chance of salvation in the beautiful and elusive Molly. But time is running out; as his underworld clients lose patience and the psychiatrist's net closes around him, Johnny has to negotiate the escape act of his life.

Evoking the boulevards and strip bars of 1980s LA with cinematic intensity, The Contortionist's Handbook is a darkly hypnotic and stunningly original debut.

'A dazzling and highly original debut novel which instantly establishes its author as one of the most interesting writers to emerge in years. This book deserves to be massive and I think it will be' Irvine Welsh

'Craig Clevenger has crafted an unforgettable antihero in John Dolan Vincent. This is an extraordinary debut' Richard Kelly, director of Donnie Darko

'What sticks out about this remarkable debut are its pitch-perfect shock ending and John Vincent himself - his complex, conflicting mind, original voice and unnervingly self-defeating existence' Time Out

'A very impressive debut. The reader sees it from the con-artist's perspective, delivered in a snappy, first-person voice that Clevenger writes with assured flair. This is a tightly controlled piece of work with an intriguingly original approach to the genre that marks the author out as one to watch' Metro

Craig Clevenger was born in Dallas, Texas and raised in Southern California, where he studied English at California State University, Long Beach. He has travelled extensively and lived in Dublin and London. He now lives in California where he is at work on his second novel, Dermaphoria.

GOR001221216
9780007194155
0007194153
The Contortionist's Handbook by Craig Clevenger
Craig Clevenger
Used - Very Good
Paperback
HarperCollins Publishers
2006-05-02
208
N/A
Book picture is for illustrative purposes only, actual binding, cover or edition may vary.
This is a used book - there is no escaping the fact it has been read by someone else and it will show signs of wear and previous use. Overall we expect it to be in very good condition, but if you are not entirely satisfied please get in touch with us
Trustpilot