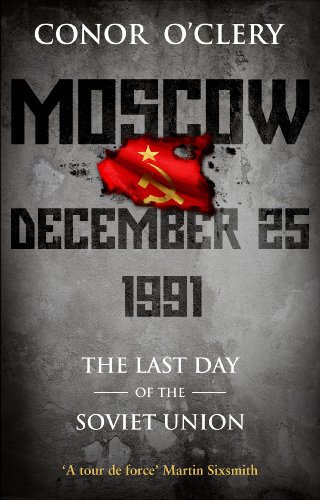 History always comes down to the details. And when it comes to the fall of the Soviet Union, the details are crucial, especially when such an era-defining event hinged on the bitter personal relationship between two powerful men, Mikhail Gorbachev and Boris Yeltsin.

On the twentieth anniversary of the end of the Cold War, Conor O'Clery has built his compelling and brilliantly constructed narrative of the fall of the Soviet Union around one day, December 25, 1991, the date Gorbachev resigned and the USSR was effectively consigned to history. From there, O'Clery looks back over the events of the previous six years: Gorbachev's reform policies of glasnost and perestroika; Yeltsin's ignominious fall and then rise to the top; the defiance of the once docile Soviet republics; the failed August coup by the hardliners; and the events that swiftly followed until a secret meeting in a central European forest sealed the fate of the communist monolith and the clock ticked down to the last day.

The result is an intricately detailed, thoroughly researched book, based on interviews with many of the key figures in a drama of Shakespearean intensity as well as contemporary reportage, the memoirs and diaries of key political figures and official documents. The book is written at a breathtaking, dramatic pace, drawing the reader in as it focuses equally on the personal and historical stories.

Moscow, December 25, 1991 is set to become a defining book on the fall of the Soviet Union.

Conor O'Clery's book is a tour de force. It tells the story of one of the most momentous days of recent history with insight, passion and precision. Full of new material and fascinating stories, it is a must read for anyone interested in the fate of democracy in the modern world -- Martin Sixsmith
Grips you from first to last -- John Murray * Irish Independent *
Elegantly written... a superb storyteller -- Victor Sebestyen * The Sunday Times *
A clear and exciting account of these momentous times, written by... one of the great reporters of our age -- Peter Hitchens * Daily Mail *
A riveting read... rich in humour and humanity and replete with assured judgments -- Judith Devlin * The Irish Times *
Journalist Conor O'Clery holds a unique perspective on the last years of the Soviet Union, having opened the first foreign bureau in Moscow for The Irish Times in 1987. He was subsequently foreign correspondent in Washington, Beijing and New York (witnessing first hand the 9/11 attacks). One of the most respected journalists in Ireland, he twice won Irish Journalist of the Year. He has written eight previous books, including Melting Snow: An Irishman in Moscow; The Greening of the White House, about the Clinton presidency; The Billionaire Who Wasn't, a biography of philanthropist Chuck Feeney; and May You Live in Interesting Times: Journals of an Accidental Correspondent.
GOR004935926
9781848271142
184827114X
Moscow, December 25, 1991: The Last Day Of The Soviet Union by Conor O'Clery
Conor O'Clery
Used - Very Good
Paperback
Transworld Publishers Ltd
2012-06-21
560
N/A
Book picture is for illustrative purposes only, actual binding, cover or edition may vary.
This is a used book - there is no escaping the fact it has been read by someone else and it will show signs of wear and previous use. Overall we expect it to be in very good condition, but if you are not entirely satisfied please get in touch with us
Trustpilot